Home » Culinary Arts » Kitchen Tools and Equipment » What is a Kitchen Twine?

In some cases, it would be necessary to do some tying and knotting when preparing food. That is why, it is important to keep a kitchen twine in the kitchen which you could easily pull out if you happen to need one. But what is kitchen twine? 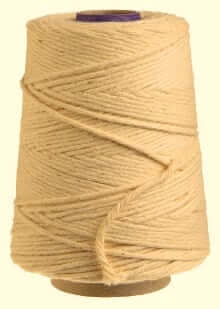 A kitchen twine is not similar to the ropes which are found in hardware stores. It is found is specialty stores which focus in selling kitchen essentials. The twine comes in spools.

Kitchen twine is particularly made to be safe and efficient for trussing food. It is also called butcher’s twine in some stores. Usually, this is made of cotton fiber and it is also thick. Other manufacturers use linen which is also a good material for kitchen twine.

This type of twine should be made of natural materials. It should not be plastic, polyester or nylon. When food is prepared using a twine, it means that the string would also be subjected to heat. If the twine is made of plastic, then this would melt during the cooking process. Aside from not being able to maintain the desired shape of the food, the molten plastic may also mix with the ingredients and become toxic.

Synthetic materials are not safe for health too. These materials use a myriad of chemicals which could result to health problems. Aside from digestive issues, it could also trigger more serious problems like severe allergic reaction.

How Kitchen Twine is Used

There are certain recipes which require the food to be tied up before it is put inside the pot or oven for cooking. For example, stuffed meat has to be tied to keep it intact while being cooked. The meat is sliced in the middle and the prepared stuffing is placed in the gap. If this is not properly laced, all the stuffing would come out before the cooking process is done.

There are different ways on how chefs and cooks use kitchen twine. One popular method is the butcher’s knot. This starts at the end part of the meat and then forming an initial loop which will be connected to the second loop. The second loop should be a few inches away from the first one and the process goes on depending on the length of the meat. Of course, other people have varying techniques when trussing meat. Some cut the thread in desired lengths and then individually create loops which are finished off with a double knot. In some cases, the kitchen twine is used with meat-trussing needles.

The important thing is that once cooking is done, the string should be snipped using shears. Since the thread is made of cotton or nylon, removing it would not be such a difficult thing to do. After removing the kitchen twine, then the meat can be carved or the dish can be opened and served as desired.

This may not be something that is needed in the kitchen every single day but it is important to have a spool of kitchen twine that is always kept clean. That way, there is no need to use alternative strings which are not specifically made for tying food.