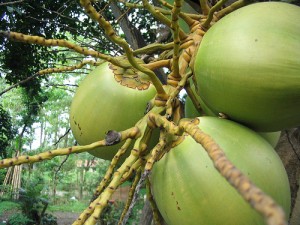 Coconuts were dubbed as such by the Spanish and Portuguese explorers. Apparently, the brown and hairy surface of mature Coconuts reminded them on one of their childhood fear, the Iberian Bogeyman of which they call “El Coco”. According to them, El Coco is a hairy monster that hides under the bed of children and eats those who misbehave.

Most of us might be familiar with this fruit and we might have different memories when we think about it. Some might recall a tropical vacation wherein they are sipping coconut water from a young coconut while sunbathing; and others would possibly envision their folks cooking their favorite dish using mature coconut as an ingredient. Some of you might even remember a song that was made famous by a teen singing group during the early 90’s (I think it goes like “it’s the coco fruit, from the coco tree…”). I’m sure that no Filipino would say that he/she is not familiar with this fruit. The Coconut tree might not be the national tree of the Philippines and the Coconut fruit might not be the national fruit as well but it is visible in almost every location. In fact, the Philippines was the world’s largest Coconut producer during the year 2007.

We are aware that the meat from a young coconut can be eaten. This is done by opening the shell and scraping it out. Different desserts can also be made from the meat such as buko salad, ingredient for halo-halo, and bukayo. It is also a fact that mature coconut (niyog) can be used in making sweets and serve as a cooking ingredient. But did you know that there are other valuable uses of coconut? According to the Philippine Coconut Authority (PCA), the other uses of the Coconut are: