If there is staple, ordinary, rock salt, why are people encouraged to use iodized salt instead? This is mainly because this type of salt is fortified with additional amount of iodine. Because of that, regularly adding this instead of the typical rock salt leads to higher intake of iodine. 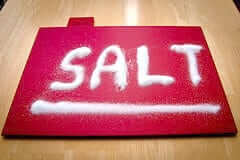 Iodine is essential when it comes to maintaining excellent condition of the thyroid gland. Some people easily assume that thyroid does not exactly need special care. However, the truth is that jeopardizing its health can lead to a lot of different illnesses. Among the usual problems include goiter. This is caused by the swelling of the thyroid gland. Hence, a lump may develop within the neck area. Goiter is typically accompanied by pain and difficulty in swallowing and eating.

Regular intake of iodized salt can also help in combating the illness called cretinism. It is triggered by iron deficiency and it also makes a person suffer from developmental and mental delays.

We commonly hear encouragement to use iodized salt these days because of its health benefits. Interestingly, the role of iodine in fighting goiter and cretinism was only discovered during in the 20th century. In the mid 1920s, production and selling of this became popular within the United States. The years before this, particularly during the World War II, a lot of men were considered as unfit for duty because they have iron deficiency. At first, manufacturers were apprehensive to venture into production of this type of salt since people might not buy them. Plus, it also involves extra steps in the manufacturing process. However, when consumers realized the benefits they could get with it, sales began to rise too. Since then, bold steps were taken to increase the production of this salt so people could escalate the amount of iodine that they can get. The use of iodized salt became more popular.

Today, this type of salt can be easily differentiated from the traditional rock salt. It has a finer texture and the labels specify whether it contains dietary iodine or not.

To be able to enjoy the benefits of salt with dietary iodine, it does not mean that one has to take consume a large amount of it every single day. According to nutritionists, it the only recommended amount is about 150 micrograms per day. This is already sufficient to avoid diseases like goiter and cretinism. One teaspoon of it already contains 400 micrograms of iodine. Hence, there is no need to make your dishes extra salty. A pinch of it on every recipe will already suffice.

The price of salt with iodine is not much higher compared to the regular rock salt. Aside from that, this would not give your dishes an altered taste. Hence, it would not make much difference to switch to salt with iodine.

Given the fact that iodized salt works pretty much the same as the typical rock salt, there is no reason to hesitate with its use. It will add more nutrition to your food without making you spend more just to achieve the right amount of saltiness.