Home » Culinary Arts » What is the Difference Between Baking Soda and Baking Powder?

Our adventures in the kitchen lead us to try different recipes. Most of these recipes require ingredients that we are completely unfamiliar with – while others ask for common ones. However, there are still some of us who might not have any idea as to what make-up these common ingredients. I bet that you experienced this sometime while you were still learning to cook. 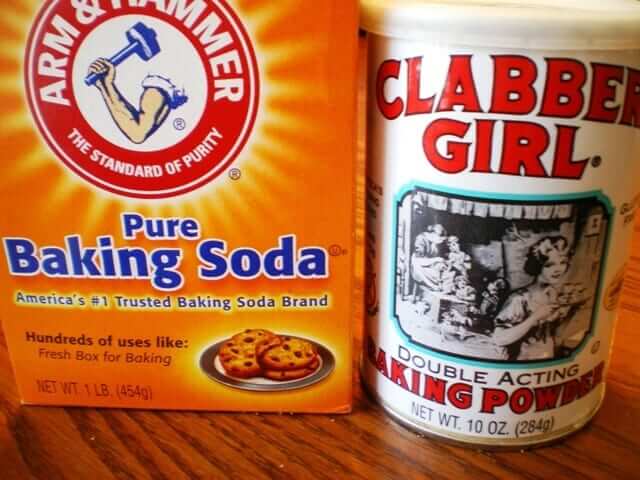 If you are fond of baking cakes and pastries, chances are that you’ve tried different cake and bread recipes that made use of baking soda, baking powder, or both. Why is there a variation between these ingredients? What is the difference between the two?

Both baking soda and baking powder are considered as leavening agents.

Leavening agents are ingredients that produce carbon dioxide when added or mixed with dough or baked in the oven (as a result of chemical reaction); the carbon dioxide produced inside the dough expands it and causes the bread to rise.

Baking soda is a compound known as Sodium Bicarbonate (NaHCO3). When it is combined with acidic compounds and moisture, a chemical reaction takes place. The chemical reaction triggers the baking soda to release carbon dioxide which produces bubbles that expands the dough and makes it rise. The following are considered as acidic compounds that can cause reaction when mixed with baking soda: phosphates, cream of tartar, lemon juice, yogurt, buttermilk, cocoa, vinegar.

Going back to our previous question; why is there a variation between these ingredients?

The main ingredients in a recipe call for the variation. For example, baking soda will taste bitter if does not fully react with an acidic component. This means that moderate amount of acidic ingredients should be present in a recipe to obtain optimal taste and texture when baking soda is used. Most lemon cake recipes require the use of baking soda.

If the ingredients are not too acidic, baking powder should be used. Using baking soda will just make the dough flat and taste bitter. It takes an acidic compound to trigger a chemical reaction. Since acid is already present in baking powder, only moisture is needed to activate the reaction and release carbon dioxide without affecting the taste.

Now that you have an idea, let’s revisit some questions posted in the comments section of our previous featured recipes.

No. Although baking powder is also a leavening agent, using it as an alternative for baking soda might affect the taste of the cake or pastry.

2. The recipe requires for baking powder but I only have baking soda, can I use baking soda instead?

It depends. You may use baking soda as an alternative for baking powder only if you mix it with an acid compound. Using two parts of acid compound (such as cream of tartar) and one part baking soda should do the trick.

Did you find this article helpful? Do you have more information to add? You can always place a comment below.