Do you really understand what the cookbook and recipe procedure tells you? Have you messed-up any dish because of not doing the correct steps?

Hey guys, I’m not belittling anyone. It just so happened that I was one of those who answered “yes” to both of the questions in the past. I was thinking that this simple definition that I have here could help you understand more and avoid the mistakes that I did. By the way, I’m trying not to be so serious here so please forgive my additional comments after each definition. Hope this helps. 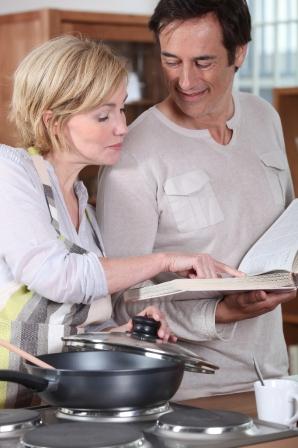 Bake – Cook and make edible by putting in a hot oven; prepare with dry heat in an oven; “Please bake some pandesal, monay, and pandecoco”

Baste – This term is often used when roastingchicken or cooking meat in a marinade. You will need to regularly “baste” the meat with the juices or sauce to keep it moist. You can use a spoon to spoon the juices or sauce over the meat or you can use a “baster” which is a bit like a syringe or bulb. The mag-iisaw is bastingwhen he dips the brush (usually paint brush) in a bottle with oil mixture and applying it on your isaw or betamax while being grilled.

Beat – A term often used in cookingor baking. You may be instructed to beat and egg – simply crack an egg into a bowl and beat (stir rapidly) with a fork or whisk to combine the yolk and white. In cake recipes you may be instructed to beat the margarine and sugar together – use an electric whisk or beater for ease. Before steaming the lecheflan, the egg yolk should be constantly beaten. You might hear your mom saying “Anak, mag bati ka ng itlog para sa agahan”.

Blanch – A recipe may call for blanching vegetable. This simply means to plunge them into boiling water for about a minute.

Chop – self explanatory but use a good sharp knife and try to chop vegetables etc. so that bits are uniform in size and thickness. Onions often have to be chopped finely so chop them as small as you can.

Cream – Cake recipes often instruct you to cream the butter or margarine with the sugar. Beat them together either with a wooden spoon or electric mixer until they are well combined and the mixture has turned a paler color.

Dice – If you are instructed to dice meat or vegetables it means that you should chop into uniform squares.

Fillet– This word can either be used as a noun or a verb. A meat fillet is a good quality piece of meat which has been “filleted” had the bones removed. If a recipe asks you to fillet a piece of meat or fish it means you need to remove the bones. Fish fillet is used in preparing “kilawin”.

Fold – Cake recipes often tell you to fold in the flour after creaming the margarine and sugar and adding eggs. Remember that this is different from the term used in playing poker.

Julienne – This term is used with vegetables. Julienne carrots are carrots which have been chopped into matchsticks or strips. So the next time you see this word in a cookbook, always keep in mind that this is a valid verb used in cooking and not a type of carrot :).

Marinate– To coat a piece of meat or fish in a sauce usually overnight or for a few hours in the fridge. The meat will take on the flavors from the sauce. “Marinade the liempo that we will grill in our inuman tomorrow.

Pare – Remove the skin from fruit or vegetables. Remember, this is not your child’s God Father.

Peel – Remove the skin from fruit vegetables or prawns. “I can peel it”

Poach – To cook in liquid. Poached eggs are cooked in boiling water and poached fish is often cooked in hot milk. Are you thinking about your small bag? Well, this isn’t it.

Puree – To puree a vegetable or fruit is to blend it until it is as smooth as baby food. Use an electric blender.

Sauté– You can sauté vegetables and this means to fry in hot oil over a high heat for a short amount of time.

Season – To flavor with salt and pepper.

Simmer– It means to bringa sauce to boilingand then turn down to a level where the sauce is bubbling but not boiling.

Stiff peaks – If you are instructed to beat cream or egg whites until stiff peaks are formed then you need to whisk or beat until the mixture forms peaks which do not collapse and you could even turn the bowl upside down without the mixture immediately falling out.

Stir-fry – To stir-fry is to cook meat and/or vegetables in a wok at a high temperature. Stir-fry packs can be found in supermarkets and all you have to do is fry them briefly in hot oil in a wok add sauce or spices and serve with noodles or rice.

Scald – Applying heat that is close to the boiling point. It’s not the verb describing your actions to your kid when you are mad;).

Sift/sieve – sieve separates wanted/desired elements from unwanted material using a tool such as a mesh, net or other filtration or distillation methods, but it is also used for classification of powders by particle size, or for size measurement as an analytical technique. A strainer is a type of sieve typically associated with separating liquids from solids.

Whisk – Use an electric whisk or a hand whisk to beat something like cream. This is different from Johnnie and Jack.