We often hear about how convenient it is to start with a blank canvas– to work with the simplest elements in order to create something entirely new and vibrant. I could say that this does not only apply to art, as this works also in the field of cooking. Some of the most exciting food to work with are those with a level of simplicity to them that make them the perfect base for something delightful and tasty. And a dish that runs right along these lines perfectly is the most popular Filipino bread there is. Read on if you’re interested in a most fluffy, and simply tasty Pandesal recipe. And alongside this, read about some trivia on the beloved bread! 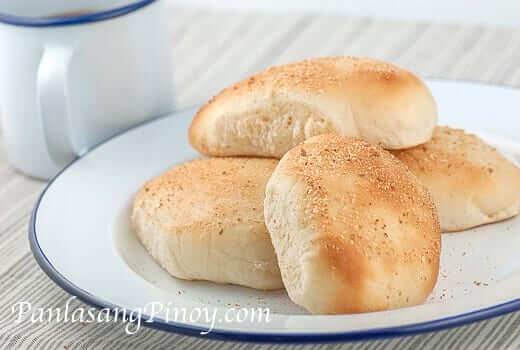 This is because the famous bread originated from a need to turn to innovation when early Filipino bakers were looking for a cheaper option for flour. Pandesal, in turn, was originally made from wheat flour. Additionally, American wheat soon became more affordable than rice in the 1900s. And so this bread and other recipes that largely made use of wheat grew in popularity.

Commercial yeast, canned dairy, and baking pans also became cheaper to produce. This is because of the massive population of American immigrants in the earlier part of the 20th century. This only helped increase the demand for pandesal.

However, it also evolved from a bread that was present in the country before the American colonization. Pan de suelo or “floor bread” was popularized by the Spaniards upon their arrival in the Philippines. And it is still popular in the country today. But it is comparably less of a household name than the familiar pandesal or “salt bread”.

Despite not possessing the richest flavors, it is an incredible go-to for Filipinos looking for a versatile snack. It works as a savory treat, as it makes for a great sandwich with a bit of corned beef, ham, or most meat you might be able to name! Alternatively, most locals also opt for simple sweet fillings for this bread. You might have heard of the infallible combinations of pandesal and condensed milk, or with peanut butter.

The possibilities are endless for this blank canvas of a bread. But it can also taste great on its own– compact, fluffy, and delightfully salty-sweet!

How to Make Pandesal

Start stirring 1 pouch of rapid rise yeast, ½ cup of white sugar, and 1 ¼ cup of warm, fresh milk. Keep doing this until you can see that the yeast and sugar have dissolved completely. Then in a separate mixing bowl, combine the dry ingredients, starting off with the 2 cups of all-purpose flour, 2 cups of bread flour, sugar, 1 teaspoon of salt, and 1 teaspoon of baking powder. Stir this as well.

Then incorporate 1 raw egg, 1 tablespoons of melted butter, 1 tablespoon of cooking oil, as well as your yeast-sugar-milk mixture in the mixing bowl containing your dry ingredients. Mix this again until your dough has formed. Then with clean hands, mix your ingredients and make sure they are blended well together.

Use a flat surface for kneading the dough until you achieve a fine texture. You could also utilize a Stand Mixer with a dough hook if you’d like to have an easier kneading process. Also, mold the dough until it becomes a round shape. Then place it back in your mixing bowl and cover it with a damp cloth. You will be waiting for at least 1 hour to let the dough rise.

Place your dough on a flat surface, and using a dough slicer, separate this into 4 equal parts. Form a cylindrical shape with these parts by rolling them, then slice each cylindrical dough diagonally. Take note that these slices will later be our individual pieces of pandesal.

After this, roll your sliced dough over breadcrumbs, and put this in a baking tray lined with wax paper. Since we expect our pieces of pandesal will be rising, make sure to provide enough space among the dough. Then leave it in the tray with breadcrumbs for 10 to 15 minutes more for it to rise.

Get your oven ready for baking by pre-heating it at 375 °F for a total of 10 minutes. Then we’re good to go with our tray of dough! Bake this in your oven for 15 minutes. When this is done, turn your oven off. Then place your warm, delicious batch fresh out of the oven on your serving plate or tray of choice.

You might want to try these dynamic, delicious combinations

If you have some leftover at your disposal, I have a few suggestions to elevate your day-old bread. One of them is this savory, creamy and cheesy Pandesal and Sardines Pizza recipe. You could try this for a more flavorful bite of your classic salt bread. Peppered with red pepper flakes, cheddar cheese and tomato paste, your taste buds will love the subtle sweetness with this one of a kind pizza.

Now what is a classic breakfast back home without a batch of freshly baked bread? I put together this Simple Filipino Breakfast to marry some of our local breakfast favorites in one filling, flavorful plate. Other than the classic hotdogs, fried eggs and pandesal combination, I also listed a couple of great Filipino breakfast concoctions, such as sinangag and beef tapa.

Canned sardines, in itself, can already provide for a pretty flavorful filling for your pandesal, and is actually among the savory favorites to have with your bread. However, these sautéed sardines give your usual fish filling or viand a fresh, simple spin in incorporating a bit of citrus, garlic and onions. These will bring out the taste in your sardines, while reducing the sometimes unpleasant saltwater taste of canned fish.

Making a sandwich spread is largely convenient because making a big batch could mean having a guaranteed delicious snack for days to come. And getting our hands on a basic, but unmistakably flavorful and delicious tuna Sandwich Spread makes it an even easier, practical process. Just grab a couple pieces of pandesal from our recipe earlier, fill it with some of this mildly sweet, delectable spread, and your afternoon’s practically made!

How do you like your pandesal? Let us know in the comments!

Watch how to make it