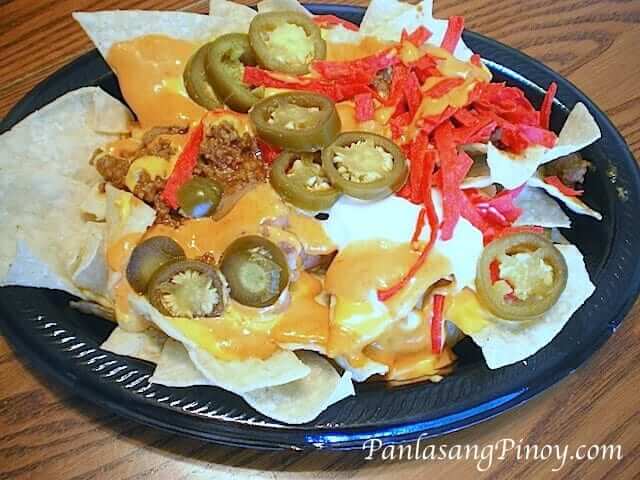 The first time I saw this was when we drove through our neighborhood Taco Bell branch. The picture on the poster was so appealing as if its tempting me to give it a try. I was hesitant to order the Volcano Nacho at first because I was thinking that it is just a dressed-up Nachos Bell Grande and the price is something to think about (it costs more or less $3.79 a piece).

I was intrigued and really want to experience the feeling of eating something with Volcano Sauce (this is quite hot for me) on it plus slices of hot  jalapeno pepper (even hotter). Do I really want to torture my taste buds was the first question in mind. But the strips of red tortilla really looked good and mixing Volcano Sauce with Sour Cream might not be a bad idea, so I decided to give it a try.
My taste buds went off for a few seconds after taking my first bite. It was soooo hot but the beef, cheese, and beans were tasty enough. It’s not like eating something appealing to the eyes but tastes like chili because of overwhelming heat. Yes, the heat was overwhelming but for some reason the taste is still there. I would say that I could eat this ocassionally but not on a regular basis.

I immediately remembered Adam Richman (host of Man vs. Food) and his hot ramen challenge at Orochon. That guy is really a tough one (I salute you Adam). I bet he could eat Volcano Nachos thrice a day without complaining about the heat. As for ordinary guys like me, having Volcano Nachos once a month or so is  just enough.

In my opinion, Volcano Nachos is still a great treat but it could be better if they lessen the heat and the price as well.