I felt that I needed a quick bite as I drove home from work. Luckily, I was about to pass-by a Panda Express location and decided to grab a box for dinner. I got a 2 entrée plate consisting of Orange Chicken, Beijing Beef, and Chow Mein for sides. 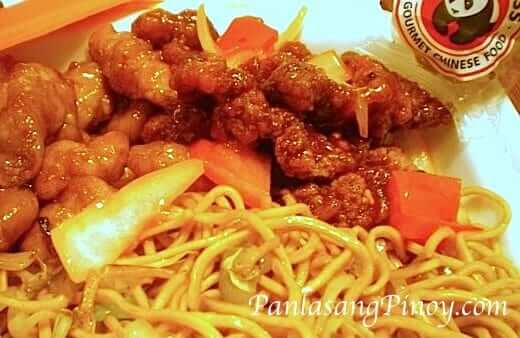 Let’s not talk about Orange chicken and Chow Mein for now because my attention is focused solely on Beijing Beef. However, you might want to check our Orange Chicken recipe post if you want to know more about it. As for the Chow Mein, the closest recipe that we have is the Pancit Canton– which I think is a better alternative.

There isn’t really anything extra-ordinary about the Beijing Beef – but I still like to have it once in a while. The flavor is probably the main reason why I like it. I am a fan of sweet and sour pork and this dish is pretty much similar – that is if you raise it to the next level. You’ll understand what I’m trying to say once you try one. After the first bite, the tangy taste immediately permeates in your mouth leaving you speechless – looking forward to the next bite. Since the flavor is so rich, it is advisable to balance it by having some sides (such as rice or noodles) while munching. The texture is unique compared to the other Chinese beef dishes that I had, so far. It also has the consistency of a fried flank steak but tender when chewed.

I guess what drove me to try this the first time was their massive advertising campaign. I got curious and eager to try this dish (which was a new addition during that time) to check the validity of their claim: Crispy, Tangy Tasty. Well…it is.

The next reason is probably the fact that I associate Panda Express with Chowking. My family enjoys the foods served in Chowking and we usually try to dine-in at least twice a month when we were still back home. Even though there are a lot of differences between the two, there isn’t any Chinese fast food resto in Chicago that I can compare Chowking with in terms of commercialization and accessibility (good thing our kababayans in California and Las Vegas can check-out the real deal. I’m not sure as to where the other international locations are, care to share some info? ).

I enjoy eating Beijing Beef and this is definitely something that you must try.