The human diet has evolved drastically since the Paleolithic period of our caveman ancestors. Millions of years ago, people ate what they hunted and what they could gather. Today, getting food is as easy as browsing the aisles of a supermarket.

According to Paleo diet supporters, this evolution has its benefits and downfalls. Although the way food is produced is much more convenient, it has also ushered in an age where human beings have strayed from a healthy diet in favor of modern foods that cause a range of diseases and ill health. 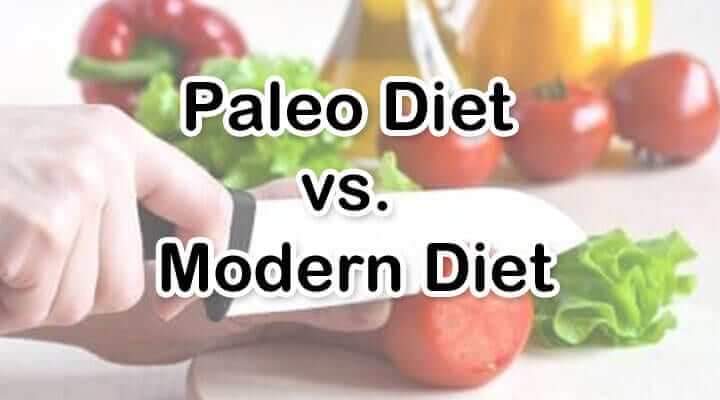 Overview of the Modern Diet

For Paleo diet experts, the modern diet began with the agricultural or farming revolution. This is when human beings stopped hunting and gathering foods and started farming grains and domesticating animals. This change in food production was the catalyst to more advanced ways of farming and led to the introduction of the foods we eat today.

Although farming technology has allowed farmers to feed growing populations in a more cost-effective, convenient way, it is also the reason why modern humans suffer from poor health. In other words, the agricultural revolution led people away from what we are designed to eat to a diet that is unnatural and unhealthy.

Problems with the Modern Diet

Paleo supporters argue that the diet humans follow today is unnatural, harmful and low in nutrition compared to the Paleolithic diet.

During the Paleolithic era of cavemen (hunter-gatherers), grains were not considered a good food source. Grains like wheat, rye, rice and barley were thought of as “peasant food” and only eaten when other foods were not available. Although it is not clear why hunter-gatherers did not favor grains, Paleo experts believe that it was because they were not nutritionally valuable.

Today, grains are staple foods in the human diet, so much so that they are encouraged even by health experts. Paleo supporters, on the other hand, think encouraging dieters to eat grains is a bad idea. They argue that human beings are just not designed to eat grains and doing so actually leads to health conditions like indigestion, gluten intolerance, obesity and many more.

Another problem with the modern diet is that it contains too much saturated fat and not enough nutrients. Beef, for instance, has more fat than ever before and is steadily increasing the risk of heart disease around the world. Other fatty foods considered to be healthy are dairy products like milk, cheese and yoghurt.

On top of this, processed and fast foods are now adding more unhealthy fats to the modern diet. From hydrogenated cooking oils to commercially baked goods, people are consuming foods with saturated and artificial trans fats that clog arteries and promote obesity.

In addition to being fatty, modern foods are also low in essential nutrients and high in potentially harmful substances. Modern food production technologies are replacing the vitamins and minerals the body needs with more salt, sugars and all kinds of preservatives. In other words, human beings consume more artificial ingredients than in any other age. We are eating substances our bodies are not designed to process and suffering from illness because we lack the nutrients vital to good health.

Paleo diet experts are appalled at the way that even healthy foods are turned into health hazards. Fruit, for example, is healthy when eaten raw. However, modern food technologies are now canning fruit in high-fructose syrups, diminishing the nutritional profile of fresh produce. Another prime example is processed meats that have been stripped of protein and cured in high-sodium solutions.

Effects of the Modern Diet

With people suffering and dying from heart disease, diabetes, high blood pressure, obesity and many more illnesses than ever before in human history, Paleo experts believe that the modern diet is to blame for the decline in good health. In fact, they believe that returning to Paleolithic food choices can reduce the risk of these diseases significantly and help people live longer, healthier lives.

The Paleo Diet as a Solution

To reverse and prevent the damage caused by today’s low-nutrition, unhealthy diet, Paleo experts recommend a Paleolithic meal plan. This meal plan was created to not only imitate the diet of hunter-gatherers but to formulate a diet that, in their opinion, is compatible with human DNA.

The Paleolithic meal plan encourages dieters to eat only:

Therefore, dieters should stay away from:
• All processed foods
• Fast food
• Dairy products
• Legumes
• All grains

Effects of the Paleo Diet

Nutritionally, the Paleo diet is a much better alternative to the modern diet. It features more natural, high-nutrients foods like vegetables, fruits, seeds and nuts which are loaded in vitamins, minerals and antioxidants. These are foods that people in this age do not eat enough of. Fresh produce as well as nuts and seeds are high in everything from vitamin A to zinc, which can do wonders for your vital organ functioning, metabolism and immune system.

The diet also helps those who are dependent on processed foods. Processed foods contain a number of unhealthy ingredients which should be avoided. By avoiding these foods, you are also lowering your risk of serious conditions like high cholesterol, high blood pressure and diabetes.

Another proven benefit of the Paleo diet is steady weight loss. By reducing fattening carbohydrates and sugars from grains and processed foods, and increasing protein to control your appetite, dieters can shed pounds and keep them off for life.
There are many take-away lessons from the Paleo diet that modern humans can and should incorporate in their daily diets. From replacing processed products with natural foods to increasing your intake of essential nutrients, it is a diet designed to un-teach bad eating habits and re-introduce healthier food choices to modern society.