Home » What's Cooking? » Ginataang Kalabasa or Ginataang Sitaw? Call it whatever you want

Kalabasa (Calabaza or Squash; some also call this West Indian Pumpkin), string beans, and coconut milk are the main ingredients of this Filipino Vegetable Dish known as Ginataang Kalabasa at Sitaw.This is also called Ginataang Kalabasa or Ginataang Sitaw alone, Depending on which of the two vegetables are dominant. Whatever you want to call it is not really important. What is important is that you enjoy eating this dish. 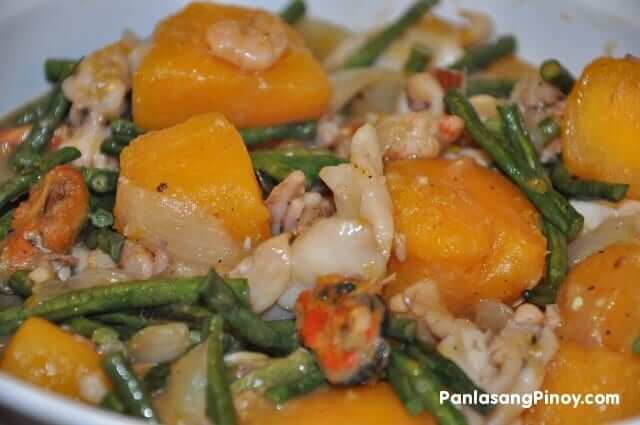 I cooked this famous Filipino Vegetable dish last week for our family dinner. I was hesitant to make this at first because I cannot find crabs (alimasag) to compliment it. It is true that you can add anything such as meat or certain seafoods to make this dish taste better,but I got used to cook this recipe with crabs.

I was in a Mexican grocery that day, good thing they have mixed seafoods that they call Combinacion de Mariscos. It is basically composed of sliced squid, shrimp, mussels, and some artificial crab meat. I was thinking that adding mixed seafoods in Ginataang Kalabasa at Sitaw would be a fair substitute for the absence of real crab; it turned out to be better.

So whats the recipe? I won’t be giving exact measurements of ingredients this time because I trust your cooking abilities now. After all that we have been through for the last several months, I know that you already improved your skills. How about trying to make this dish using your taste buds as a guide?

Filipinos love to start cooking by sauteeing garlic and onions before anything else. That is what I did at first. I then poured-in the coconut milk and let is boil for a while before I added the kalabasa. When the kalabasa was almost done, I placed the mixed seafoods let it cooked for a few minutes before putting-in the sitaw. Sprinkling some salt and pepper to balance the taste was the last thing I did.

Sounds simple isn’t it? Cooking is only procedural at first, you need to trust your intuition, experience, and taste buds later on.

Have you cooked Ginataang Kalabasa at Sitaw lately? How was it?