Brimming in a pork stew infused with aromatic peppercorn, sesame oil and soy sauce, Pata Tim is a classic Filipino dish with traces in Chinese cuisine. Its name actually originates from “Pata Itim”, which, when translated from Filipino to English, means “black pork hock”. The dish is said to be an evolved adaptation of the Chinese red braised pork dish. This red braised pork, also known as Hong Shao Rou, similarly utilizes pork and a savory, thick sauce. This is to give the meat and accompanying side dish– often rice– a burst of rich flavor. However, it mainly uses braising with moist heat. This is instead of the process of broiling and boiling, which we utilize for Pata Tim. 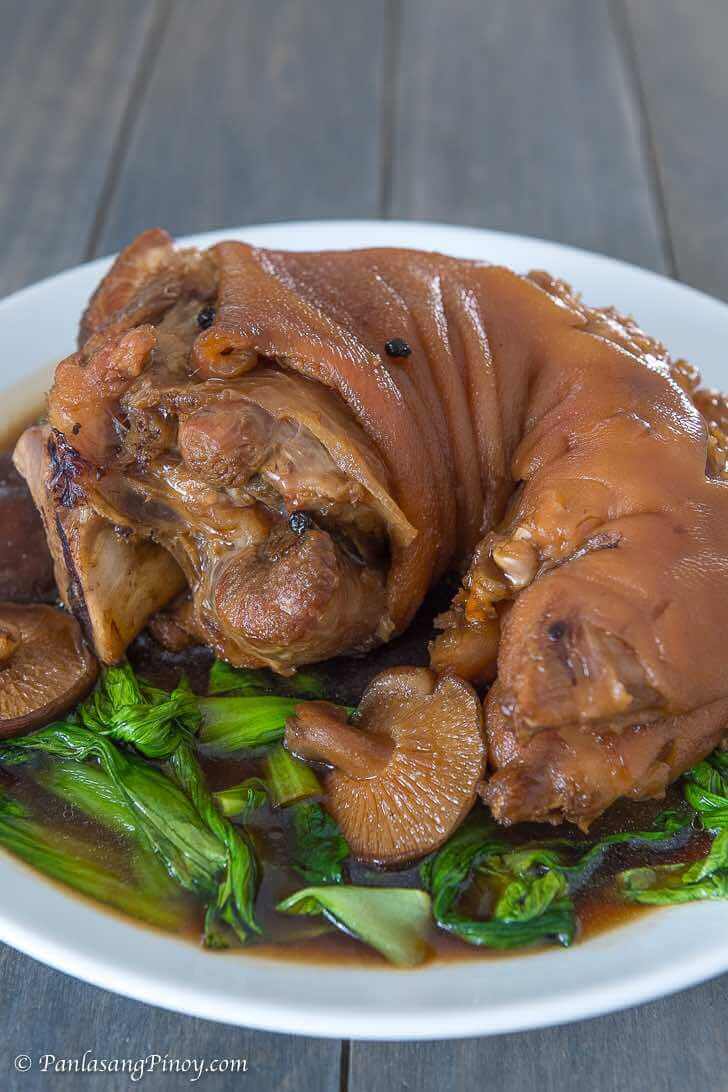 And unlike Hong Shao Rou, this localized dish tastes greatly of Filipino seasonings and preferences, what with its share of star anise and distinct sweetness. Moreover, Pata Tim has had several variations within the country. Talk about a well-loved dish!

Some variations like to input a good deal of banana blossoms into the pork stew. This ingredient provides a very delicious sour contrast to the dish’s sweetness. It also contains several antioxidants for your body, and also has anti-microbal properties. As such, adding these banana blossoms helps hype up your Pata Tim dish into one that aids your digestive system, and improves your health in sleeping.

And from province to province, there are varying renditions of Pata Tim that also integrate more ingredients to the classic dish. For example, in Pampanga, pineapple juice is integrated into the stew, as well as lime softdrink or Sprite. Not only that, but you can also find yourself munching on pineapple chunks when you taste a Kapampangan Pata Tim. With this, we can tell that there is an added factor of sweetness to the province’s adaptation.

The gracious Pata Tim is only living proof of how easily food can evolve and adjust based on the culture and place at which it resides. This Filipino-Chinese dish is far more than its solidly rich flavors. It is also a longstanding example of the creativity that comes with the art of cooking. So are you ready to get creative, and try making some Pata Tim of your own at home? Today, I am going to be giving you some pointers on creating the Filipino classic the traditional way!

For this recipe, we will be making use of a turbo broiler to evenly cook our 3 lbs of pork leg or pata in a shorter amount of time. However, you also have the optional step of broiling the pata for 2 minutes. This will keep the pata from shrinking while you boil it or use a pressure cooker on it later on. And if you do not have a turbo broiler at your disposal, you can also bake your pork instead.

I also prefer to boil the pork leg before we get started on the cooking to get rid of all the impurities in it. This usually takes about 15 minutes, and I make sure to discard the water after I am done with it. Now we can start turbo broiling!.

If you are using a turbo broiler, make sure to set it to 350 °F, then broil your pork leg for a good 20 minutes. Then boil some water in a cooking pot, and place your broiled pata inside. We will be boiling this for 15 minutes. Afterwards, drain your water, and make sure to wash the pork leg with running water.

Add some of your spices and seasonings to the mix!

Now we are ready to season our pata and add a rich set of flavors to the meat! Pour in your 6 tablespoons of soy sauce, 1 teaspoon of sesame oil, 6 cups of water, and as an optional addition, ¼ cup of cooking wine. Then place your 2 teaspoons of whole peppercorn inside as well. Boil all of your ingredients together for 1 to 2 hours depending on when you can notice your pork is tender. For this step, you can also utilize a pressure cooker for a swiffer tenderizing process. This will take only about 35 to 40 minutes.

Once you’ve gotten your pork sufficiently tender, you can add 1 piece of Knorr Pork Cube for an added salty pork flavor. Also incorporate 3 pieces of star anise, and 10 pieces of Shiitake mushroom into the pot. Cook this for 20 minutes, and feel free to pour more water when needed throughout the process. There should be a minimum of 2 ½ cups of sauce in the pot while cooking.

Time to stir in a few final ingredients to create our Pata Tim!

After this, start with 3 tablespoons of brown sugar in the pot for that defined sweetness beside your savory ingredients. Then continue to add more sugar if you feel it is needed. Stir accordingly, then pour 1 tablespoon of cornstarch, and your water mixture from before inside. Stir again, and cook this until you get a thick, brown sauce. Then place 1 bunch of baby bok choy inside, and cook again for 2 minutes.

We are now ready to serve a succulent plate of steaming hot Pata Tim! This recipe is good for sharing. And so feel free to enjoy this deliciously tender pork leg stew with family and friends.

Now if you’ve got a preference towards recipes like this savory Pata Tim that utilizes a variation of cooking methods to create an appetizing dish, I have a couple of suggestions for you.

Give some of these similar recipes a shot in your kitchen! 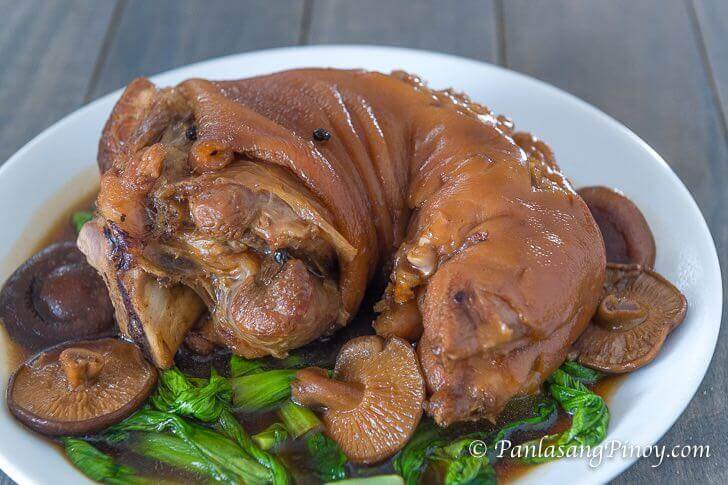 There is a one of a kind appeal that comes with the pork leg. For one, it is a distinctly flavorful part of the pig, and is versatile in working with various kinds of spices and seasonings. But if there is one surefire enjoyable and delicious way to serve the esteemed pata, it is through the boiling, seasoning and deep frying process of making a good plate of Crispy Pata.

This recipe has all of the essentials to teach you to make the seemingly complicated dish. It might take some time to make, but the results are surely worth it. You will wind up with the crispiest pork skin, and tender meat that invitingly tastes of garlic and peppercorn. This also goes remarkably well with some classic Filipino condiments or sides. Try it with a good bowl of spicy vinegar dip and papaya atchara to munch on some Crispy Pata at its best!

There might be a certain amount of intimidation coming into the kitchen and looking up Crispy Pata recipes. This crowd favorite is exactly as beloved as it is because the intricate process of making it involves some effort, and provides some room for error. But of course, it bears some of the most irresistible flavors as a result of that same effort. However, there are other ways to ease up your steps in cooking an appetizing dish of crunchy, salted pork leg. This Oven Baked Crispy Pata recipe utilizes less oil, which could be better for your health.

But more importantly, some of the steps you’ll be following should be more familiar, and easier to work with compared to the traditional recipe mentioned above. For this dish, we will be cooking the pork leg three times to ensure the most tender meat, and the crispiest skin. But no deep frying is involved. We will still end up with a satisfying crunch from the meat, but with less oil content!

Liempo is a signature dish in the Philippines that you might be able to find in most special occasions. It utilizes one of the juiciest, most flavorful parts of the pig, which is the belly. The difference with this Turbo Crispy Liempo compared to the usual way we see liempo prepared is in the name– broiling is utilized. And the broiling makes a world of difference, especially in terms of the texture of our meat’s exterior.

While a good grilled liempo, also known as inihaw na liempo, has a unique appeal in its rich taste, this recipe adds a unique crunch to the pork belly. But once you break through that crisp, you will encounter a soft, tender layer of meat after a good round of steaming or meat tenderizing. You can further enhance the taste of this delightfully crunchy liempo by having it with some of the same spicy vinegar dip I mentioned for our Crispy Pata recipe. It also goes great with our papaya atchara from earlier!

Much like Pata Tim, there are a varied many other recipes that utilize the broiling cooking method. This is because of how this takes significantly less time than most other processes, and it often uses less oil. And if you have a broiler, you can make the most of this by making some lusciously salty-sweet pasta. This No-Bake Filipino Style Lasagna gives you layer upon layer of soft, delicious pasta with the melty, hot white sauce.

Our creamy white sauce containing a wealthy deal of cheddar plays well with the textures and tastes of ground pork, garlic and onions. And it is a great way of having your lasagna if an oven is unavailable. You will end up with a cheesy, meaty and sweet pasta dish that fits well for 6 people! And you have every guarantee of coming out of breakfast, lunch or dinner– whichever time you have chosen to eat it– with a full stomach. This lasagna is chock full of carbohydrates and protein to give you the energy you need for the day.

Now have you got any questions about making Pata Tim or any of these related recipes? Make sure to send a comment our way for any inquiries! 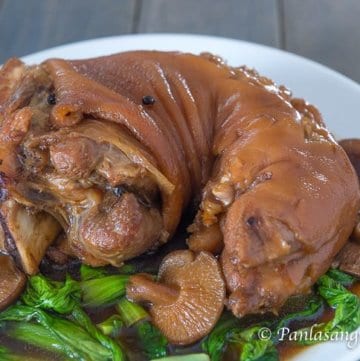 Watch How to Cook Pata Tim