Have you ever heard of star anise? True to its name, it is a small, star-shaped spice we can find in several Asian cuisines. This spice is a popular ingredient in many Indian and Chinese dishes. Its flavor profile is similar to that of aniseed, licorice, or even fennel. It is one of the five traditional Chinese elements in food, as it is one of the main ingredients of traditional five-spice powder. 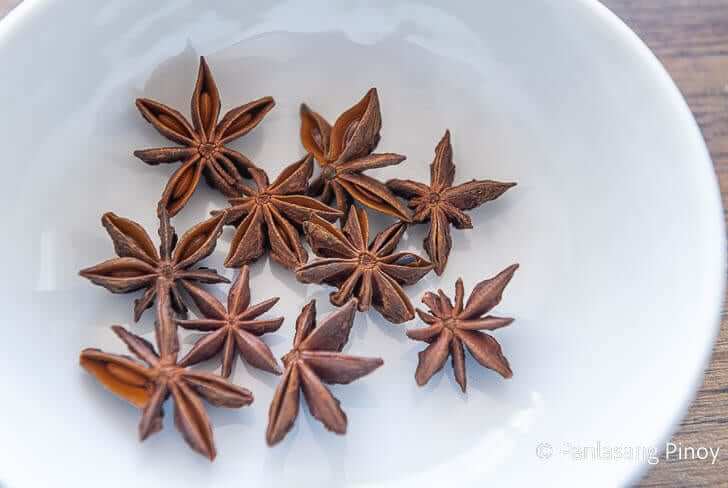 Where it come from?

Star anise is the product of the evergreen tree, Illicium verum. This tree is native to several provinces in Southwest China as well as in Vietnam, which is probably why it’s so popular in these areas’ cuisines. All of the varieties typically look the same –– all small, rust shaped, and with eight points on average. Each point contains a seed, small and pea-like in appearance. These little spices are so pretty, those unfamiliar with it might even mistake it as decor for their homes! It is typically sold either whole or ground up, but either way its unique flavor shines through in any dish you put it in.

As mentioned prior, It is one of the five major components of traditional Chinese five spice powder. Five spice powder is a common flavoring agent in several Asian cuisines, but most prominently in China. According to stories, these spices represent the five elements: fire, water, wood, earth, and metal. Combining all of these spices together meant that there would be balance, not only in the food cooked with it but in our bodies. Apart from star anise, the other four spices typically put in this powder are cloves, Chinese cinnamon, Sichuan pepper, and fennel.

Making your own five spice powder with star anise and others is simple. You can check out an easy to follow recipe for it here.

Are anise and star anise the same thing?

Funnily enough, despite their name similarities, anise and star anise bear no resemblance or relation to each other! The former comes from Mediterranean origins, while star anise, as we’ve learned, comes from Chinese provinces. Both seasonings have anethole that gives it its licorice-like flavor, but it comes out in different ways. Where anise is potent and almost spicy, star anise’s flavor profile is definitely more modest.

Star anise and anise seed can be used interchangeably in dishes. However, the proportions and amount will have to be adjusted. You don’t want your dish to not have enough flavoring –– nor too much!

What can you cook with it?

As mentioned prior, star anise is incredibly popular in Chinese dishes, whether it’s in five spice powder or as a standalone. The ingredient also makes a common occurrence in Vietnamese cuisine. Have you ever had pho before? The mild but powerful combination of rice broth, meat, and noodles is Vietnam’s national dish. And this spice helps in seasoning the dish, giving it its unique yet delicious taste you can’t get enough of.

In the Philippines, several of our dishes have Chinese origins, with our own little twists that make them distinctly Pinoy. As such, five spice powder –– or even just by itself, specifically –– remains to be one of the most popular components of several dishes here.

Here are just some examples of well loved Filipino dishes where one can find star anise: 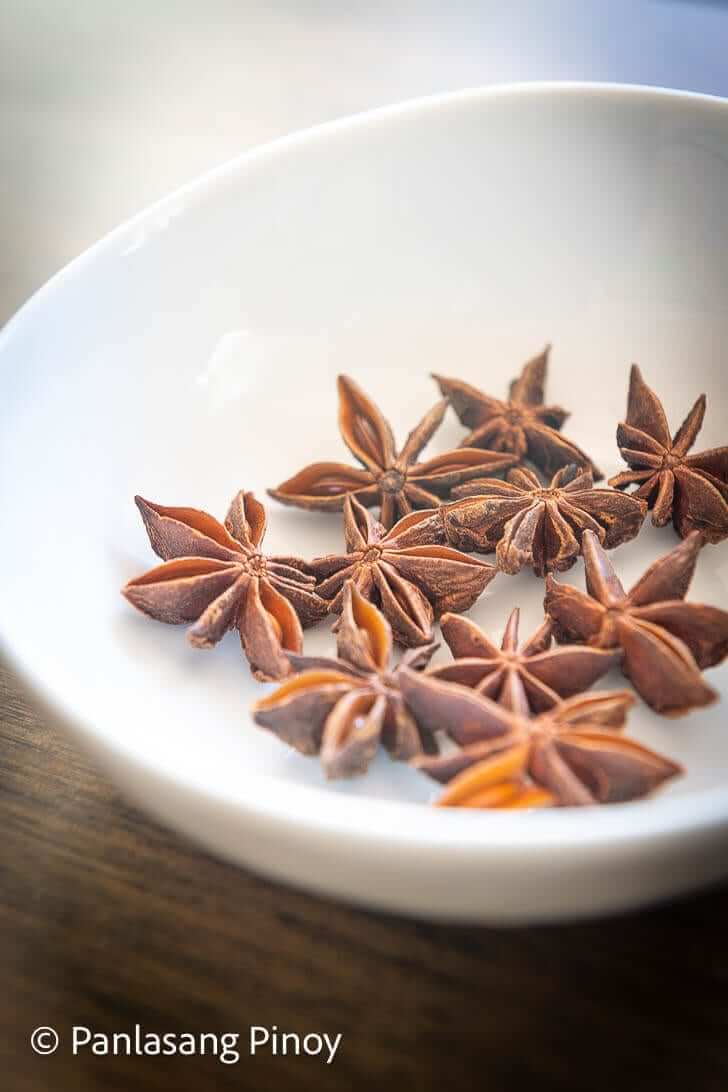 Star anise also makes an appearance in Indian cuisine, too! Garam masala literally translates to “heat” (garam) and “mixed spices” (masala). It is a blend of spices commonly used in several Indian meat dishes, like curry or biryani. With spices like coriander, cumin, and nutmeg, star anise gives Indian cuisine its colorful, vibrant flavor on your tongue. 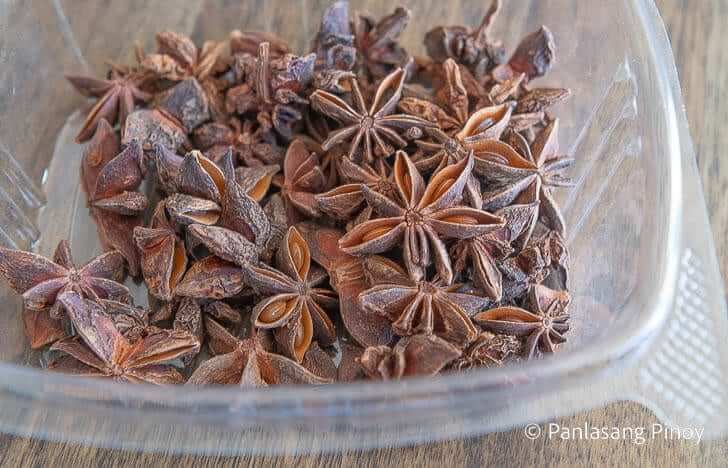 In the same way that you add cinnamon or nutmeg to desserts like pumpkin or apple pie, you can do the same for star anise! Desserts like apple crumble, chocolate tart, or even cookies get a deeper flavor profile with this special spice. The mix of sweet and savory gives your palate a twist that you and your loved ones will surely enjoy.

And if you’re of legal drinking age, you can use star anise and other spices to spice up your cocktails! Bourbon, whiskey, and other liquors taste even better when infused with star anise and ginger. This makes a great stiff drink even more relaxing. In French vin chaud (or mulled wine), it can even help steepen the flavor of your alcohol.

No matter what you eat it with or mix it in, star anise truly is a star ingredient! It’s so easy to incorporate into your cooking, and the results are always superb –– delicious meals or drinks to enjoy with loved ones.

Not only was star anise popular for its versatility as an ingredient –– it also proves to be medicinally beneficial! Star anise has been used medicinally for several decades now in China, and Western cultures are only now catching on to it.

Many of the compounds in star anise make it a great antioxidant agent. Antioxidants help boost your immunity and protect your body from a variety of illnesses. It is rich, too, in Vitamins A and C –– both integral to maintaining good health. Constipation, bloating and gas, and other digestive issues aren’t a problem with star anise around! And while studies still need to be done, star anise may also have anti-cancer properties, and can even help in making tumor sizes smaller.

Star anise’s components also make it antiviral, antifungal and antibacterial. Star anise is a renowned remedy for viral illnesses like influenza due to its shikimic acid. This acid also remedies symptoms of cough and the flu.

Star anise’s essential oil can also treat other types of illnesses, like herpes. The anethole present in star anise as well can also prevent harmful fungi from growing both on root crops and also inside human bodies once consumed. Furthermore, infections like UTI, brought about by various bacteria, can also be remedied by this spice.

Star anise is a flexible ingredient and spice, but as we know now, it’s more than just a flavorful seasoning. Its health properties are no joke –– when eaten in moderation, they can keep your body healthy and happy.

Star anise – the star of the show 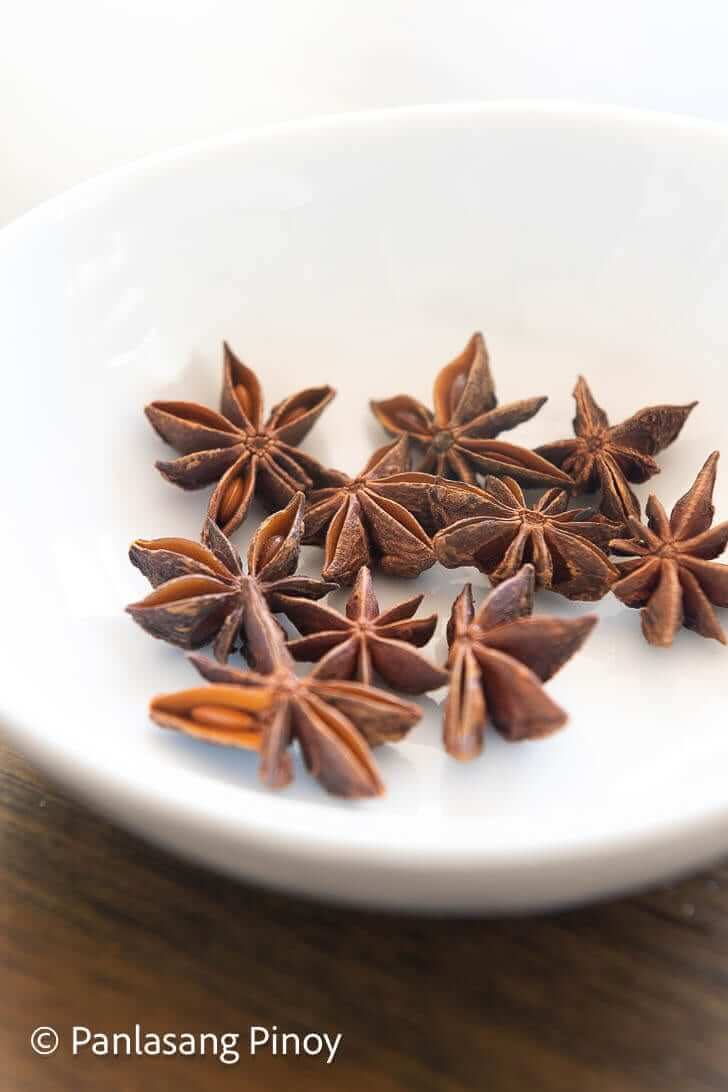 With its subtle flavor and adaptable properties, it’s no wonder that star anise has found a place in several popular cuisines and food across Asia –– and now the world. Its health benefits are plentiful, its uses abundant, and its taste, absolutely delicious.

Use star anise in your dishes for a more complex and unique flavor, and it’s sure to grab the attention of your whole family.

What do you like to cook your star anise in? Let me know!