Sisig Pizza is not a new dish. In fact, there has been a similar product included in the menu of a fast food Pizza chain in the Philippines some years back. To be honest, Sisig Pizza is something that will be appreciated by sisig lovers –- this is simply sisig presented differently. 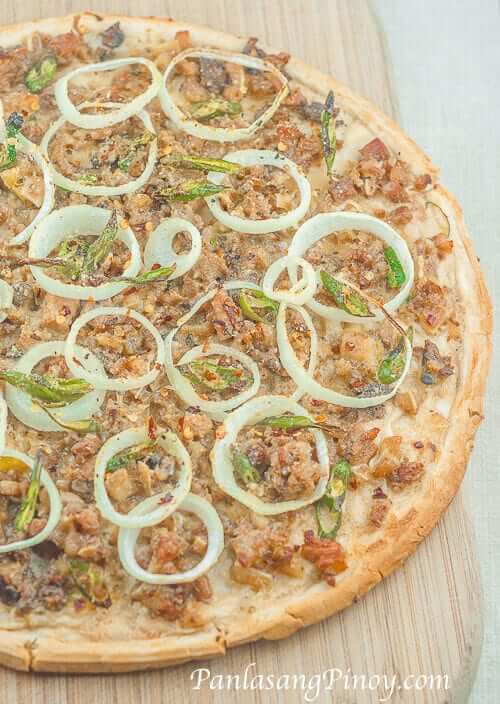 I thought of making this Sisig Pizza because I prepared too much sisig that we can consume the other day. I thought of making something out of the left over sisig so that it won’t go to waste. At first, I was thinking about sisig omelet – but I cannot bear the idea, so I opted to make sisig pizza instead.

Just like any other pizza, Sisig pizza requires a pie crust. You can either make one from scratch or buy a pizza crust from the supermarket. Guess what, I did the later. I saw a whole grain thin crust pizza crust in my local grocery store and I grabbed it. I thought that it will save me time and effort, and it really did.

Pizza will not be compete without cheese in it – but what kind of cheese will blend well with sisig? I was thinking mozzarella, or cheddar, or even Monterrey jack – since I also needed a base for the sisig pizza, I thought that Alfredo sauce was a good choice because it can hold the ingredients on top while still having that cheese flavor (by the way, Parmesan cheese is used to make Alfredo sauce). To my surprise, every ingredient that I used blended in harmony with each other.

This was my first try in making Sisig Pizza and I thought that it went well. 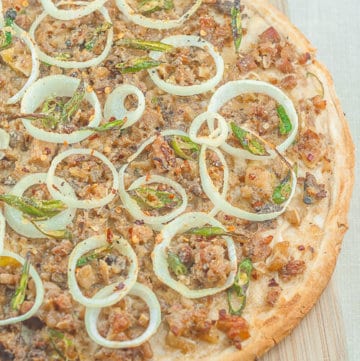