Century Egg Congee is a type of rice porridge with slices of black eggs and some chopped scallions. The egg is known as Century Egg or Hundred Year Old Egg. 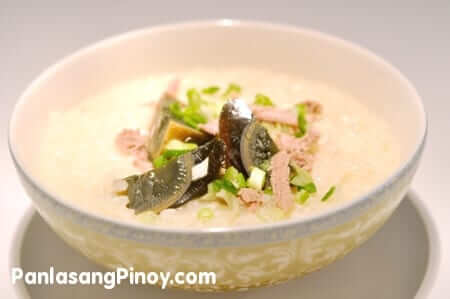 Contrary to its name, Century Egg is not 100 years old. It is a type of egg preserved in a mixture of clay, ash, salt, and other ingredients from a few weeks to several months. The process breaks down the composition of the egg which changes the color of both the whites and yolk.

The rice congee, on the other hand, is prepared similar to the Filipino Goto or Arroz Caldo. Rice is boiled in a mixture of water and chicken stock until a porridge is formed.

This dish can be enjoyed for breakfast or meryenda.

Try this Century Egg Congee Recipe. Let me know what you think.