With some dishes, all it takes is one ingredient to ensure that everything clicks. May it be a dash of brown sugar, or a good squeeze of calamansi, elevating a meal’s flavor can all come down to the tiniest added component. The smallest ingredients can bring the most impactful taste towards a dish, and for a lot of Filipino recipes, this could be the powerful serrano pepper. 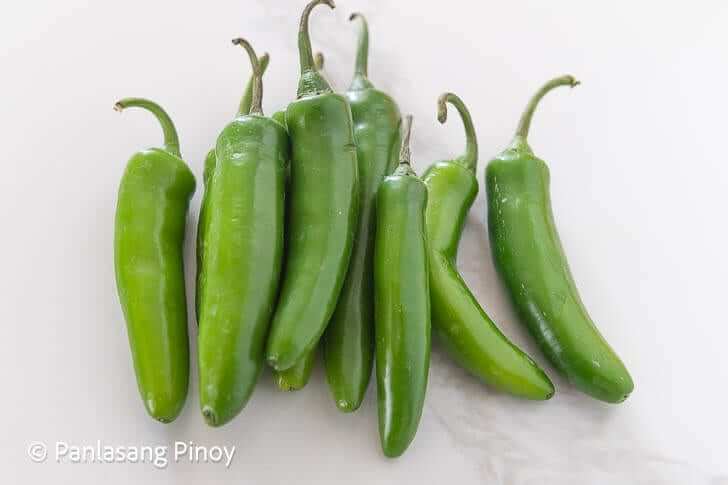 This hot chili pepper is widely used around the world, and this is because of its distinguishable flavor. It has slight notes of sweetness, but is best known for the heat it can bring to a dish. In fact, among some of the most commonly used and accessible peppers, it is up there with some of the spicier variants.

Today, the serrano pepper stands as one of the most popular chili peppers. This may partially be due to how easy it is to grow in your own backyard, with various countries harvesting their own supply. But this actually originated in Hidalgo and Puebla, which are mountainous states in Mexico.

Because of where it came from, its name is actually Spanish in origin. “serrano” came from the word sierras, which means “mountains.” But it is also known by other names, such as Chili Seco, and its scientific name, which is Capsicum anuum. Like many other peppers, it is the fruit of a plant. The serrano pepper plant grows about 2 to 3 feet tall, and can have up to 50 hanging pods.

Eventually bears its conical fruit we now enjoy with many savory Filipino meals. These chili peppers have thick walls, as well as blunt ends. And if you are shopping for some of these, you should probably go for those with solid colors, as well as firm skin. These are signs of freshness, while those with wrinkled, soft skin can indicate the pepper’s old age.

And if you want to find the spicier variations of serrano pepper, an easy way to do so is by comparing their sizes. Tinier serrano peppers tend to be hotter. And color can also be an indication, as the peppers that aren’t ripe yet usually aren’t as spicy. If you want a lighter flavor of heat, try buying some of the green serrano peppers.

How it compares to the spice of other peppers!

One very popular ingredient this tends to get compared to is the jalapeño pepper. One definite difference between the two is their size, as the serrano is smaller in size. But the more notable distinction probably comes in just how much hotter serrano can be. A serrano pepper can be about five times hotter than jalapeños. Despite their similar earthy flavor, your go-to should probably be a serrano chili pepper if you want a stronger kick in your dish. 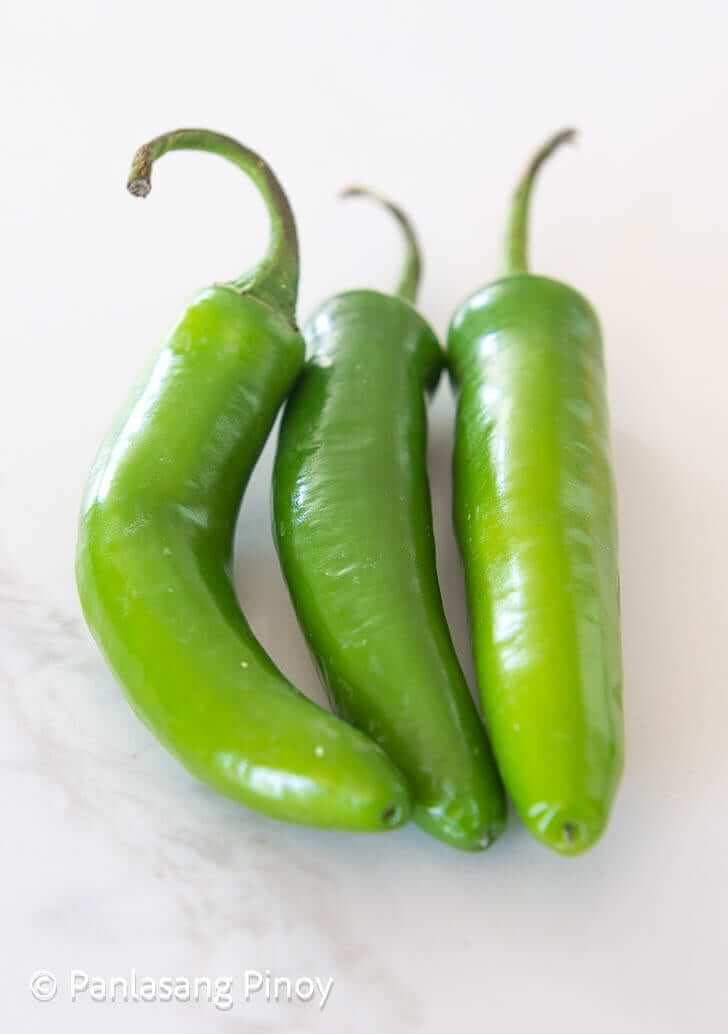 This measurement of spiciness comes from Scoville Heat Units (SHU), which is the recognized way to distinguish chili peppers’ levels of heat. And while jalapeño peppers’ SHU ranges from 4,000 to 10,000, serrano peppers have 10,000 to 20,000 SHU. While the serrano’s spice can take a bit more time to kick in, within seconds, you should be able to taste that unmistakable punch.

As for other peppers, the ever-popular poblano pepper is still significantly milder in taste at 1,000 to 1,500 SHU. But the serrano is still comparably less spicy than many well-loved chili peppers. For one, it is quite far off from the pepper measured to be the hottest with 1,400,000 SHU, which is the Carolina Reaper.

That being said, serranos still serve as a pretty good middle ground for spice because it has a significant level of heat. And this is arguably without being too overbearing or unpalatable for those with a lower spice tolerance.

Play around with these appetizing recipes

Whenever you’re craving something spicy, you can never go wrong with this Filipino classic. Bicol Express has managed to become a household staple for many because of its delectable and unique taste. This is mainly rooted from the graceful collaboration of rich, coconut milk with chili pepper, which is the serrano in our case.

Moreover, we get a much needed dose of delicious meatiness in the tender pork belly for this dish. And this is further empowered by our flavorful shrimp paste, making it taste more like a distinctly Filipino dish.

Have you ever wanted to try your sinigang with a thicker, delicious soup? Did you know that bringing along some gabi or taro to the mix could do just that? For this Sinigang na Buntot ng Baboy with Gabi, we play with some other ingredients to enhance our classic sour stew and make it stand out.

For one, you get to try pig’s tail with your dish, which is an affordable option, and can taste amazingly tender. You can make sure of this by leaving it to cook for longer, and get more of that soft, delectable texture. And of course, we get a perfect amount of spiciness to our dish with the power of 4 serrano peppers.

Is any Filipino gathering complete without a plate of steaming hot, mouthwatering sisig? But if you’re more into white meat, which can be a healthier choice, try this Sizzling Chicken Sisig recipe! Our dish keeps protein content high, while containing less fat. And of course, you can count on great flavor and a punch in our serrano peppers, as well as other classic seasonings such as soy sauce and garlic powder.

But one of the best flavor enhancers for sisig is mayonnaise, as it adds an extra layer of sticky texture and a tart kind of savor. Make sure to eat this fresh from the stove, as it is best when sizzling hot, and perhaps with some white rice. 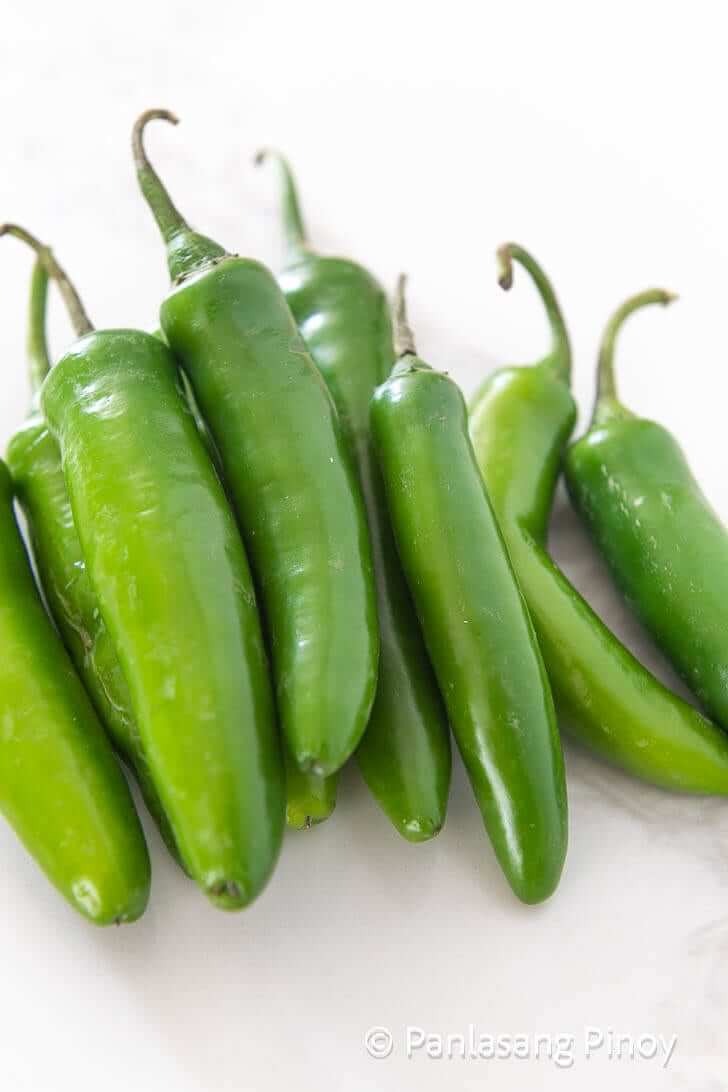 Serrano peppers can be a pretty flexible ingredient, working well with various other components. But it is also useful to enhance the flavor of a side dish or a snack, such as these Easy Beef Nachos. Our irresistibly crunchy tortilla chips taste excellent with some chopped tomatoes and ground beef for this recipe.

But we also have just the steps to guide you towards making the perfectly thick and flavorful cheese sauce. Try out this recipe for your next merienda dish!

You’re all set with a good list of recipes to try out! But what if you aren’t able to find serrano peppers nearby? The solution lies in some other ingredients you might already have in your kitchen.

We’ll start with what might seem like the obvious, but you can definitely try using some jalapeño pepper for your dish. In the place of 1 teaspoon of serrano pepper, you can put 2.5 teaspoons of jalapeño. This is to make up for the difference in spice level that the two ingredients have. This replacement works especially well because jalapeños are both accessible, and quite alike to serrano in terms of rich taste.

That, and you can use the same measurements indicated for your jalapeño if you want to tone down the heat.
But what if, instead, you’d like to hike up the heat? Cayenne pepper makes for a fitting alternative in this case. You can proceed to use the same measurements needed if you want a spicier dish. Otherwise, you can try 1 teaspoon of dried cayenne pepper for every 3 teaspoons needed of serrano.

A common ingredient you might have at home that would also work are red pepper flakes. These are essentially a dried type of cayenne, and will work wonders to add a punch to your recipe. Try a quarter of a teaspoon of this for every teaspoon of serrano pepper needed.

And it also works to use Thai chili for a substitute. I’ve used this as an interchangeable ingredient for some recipes with serrano pepper already. This is largely because of their similar flavor and texture. Just be warned that it is spicier with about 50,000 to 100,000 SHU.

How to store it properly

Firstly, like with most ingredients, refrigerating them will make them last longer. Keep them in a plastic bag, and put them in your fridge’s crisper where they can stay good for 2 weeks at most. Also make sure to wash your serrano peppers properly before you start cooking for safety! 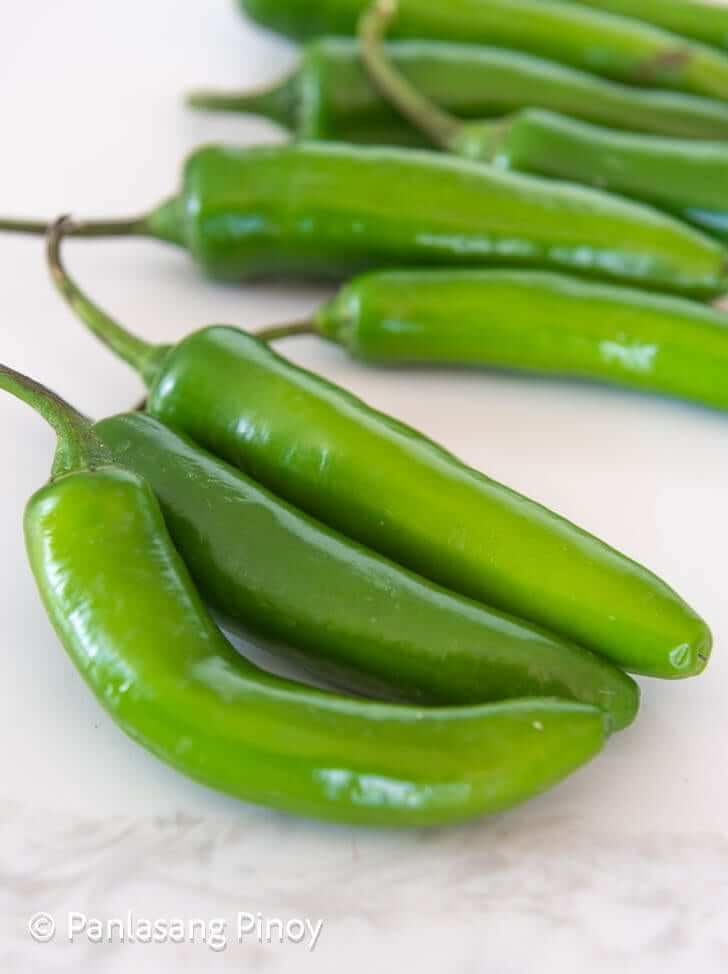 You also have the option of slicing up your serrano and freezing them before you store them for later use. Try cutting them up, then distributing them evenly on a baking sheet with parchment paper on top. Then freeze them, and then place your peppers in a zip-top freezer bag. Ensure that you’ve gotten all of the air out of the bag, then proceed to seal it. You can use these for up to 3 months.

If you have any questions on serrano peppers, let us know in the comments below! Let’s start a conversation!