Ever thought of doing a Filipino twist to Quesadilla? To those who are not familiar with quesadilla, it is simply a tortilla filled with meat and vegetables. This is popular in the Southwest area of the Unites States. Flour or corn tortilla are filled with vegetables, meat, and cheese. The meat used in quesadilla may vary, but the most commonly used is chicken marinated in  southwestern herbs and spices. 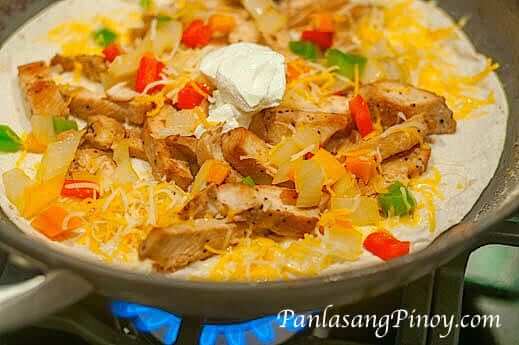 I know that most of you have thought of this idea before — I mean to use chicken adobo for quesadilla. How about making a chicken adobo quesadilla? Sounds good to me — and this will also feed your curiosity.Will this be successful, or not? Stay tuned.

This is the first time that I will be publishing my experiments. I am  adventurous when it comes to cooking, and part of the adventure is to try different variations of dishes — even the weirdest. I should have documented my food adventures years ago, but better late than never — or so the saying goes.

For this experiment, I am using boneless chicken breast, bell peppers, onions, Mexican cheese (these are combination of cheeses that I got pre-packaged from the grocery),  flour tortillas, and sour cream. I started by making chicken adobo — and this is quite different from the usual chicken adobo recipe. The chicken breasts were marinated in a mixture of soy sauce, vinegar,  ground black pepper, and garlic powder before cooking. This means that the chicken already has that adobo taste and aroma while still raw.  Interesting? Yes, and it is needed to be that way because we only need to sear the chicken for a few minutes.

While the chicken is marinating, I started to saute the onion and bell peppers. I did this for 3 minutes then placed the vegetables aside. 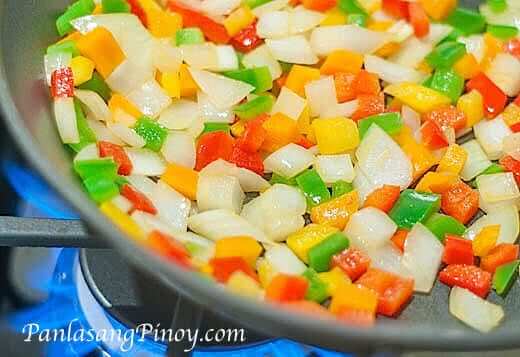 After marinating in the adobo mixture for 60 minutes, I started to sear the chicken breasts. I made sure that the chicken is fully cooked while still retaining the moisture inside.

The next step is to slice the chicken. However, make sure to let the chicken rest  for a while to retain the moisture. I simply sliced the chicken into small serving pieces. I also tried to taste a piece — it was a delicious chicken adobo according to my taste buds.

Next was to grab a piece of flour tortilla and lay it flat on a greased heated pan. I started to assemble the quesadilla by putting the chicken adobo, sauteed vegetables, cheese, and sour cream over the the tortilla. I also topped the ingredients that I arranged with another tortilla that I preheated a while ago. It is important that  the two tortillas are flattened together — just like a panini. So, I used a spatula to press the tortillas together (and the image on the very top of this article is what it looked like).

As far as I am concerned, the experiment was a success. I thought that chicken adobo collaborated well with the other ingredients. I enjoyed my Chicken Adobo Quesadilla and I plan to make more in the future.

Now, I’m trying to think of a new food experiment. My brain is kinda rusty today, you can help me think by posting your suggestions in the comments. 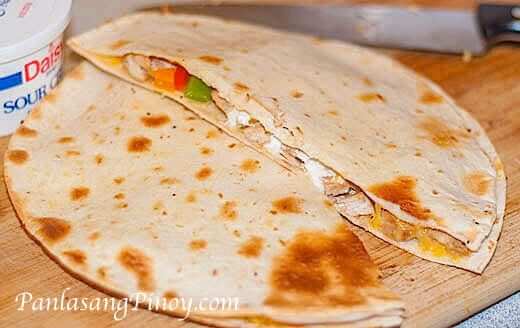