It’s really quite hard not to love a good omelette. The delicious, buttery, and creamy egg, paired alongside a filling of your choice, makes for a dish truly memorable. It’s no wonder that in many hotels and resort breakfast buffets, the omelette station is the place to be. With something for everyone, omelettes make for the best breakfast. And in my personal opinion, there’s no better way to start your day than with a nice plate of tortilla espanola.

What is Tortilla Espanola?

Tortilla Espanola –– or, as others may know it, Spanish Omelette –– is an egg dish you cook with a yummy potato filling. This omelette is as yummy as it gets, with the two main components being as delicious as they are. A signature dish in Spanish cuisine, many enjoy tortilla espanola as a tapa –– not the savory beef we know in Filipino cuisine, but rather the Spanish word for snack or appetizer. But this delicious omelette works as more than just a starter! With filling potatoes inside, it makes just as good and delicious a breakfast, too –– especially when you pair it with a nice cup of rice, either white or garlic.

An Ode to Omelettes

The first appearance of tortilla espanola in history was in 1817, and since then its popularity has grown in many Spanish-influenced countries around the world. The omelette itself, however, is known to have roots in Ancient Persia –– even if the name itself has French origins! Omelettes have taken a different name and even appearance across the globe; here are some examples of what it looks like in Filipino cuisine.

Of course, one of the most classic Filipino renditions of omelette is the ever popular tortang talong. Also known as eggplant omelette, this dish combines the healthy and delicious eggplant with everything we love about eggs! The beautiful thing about a tortang talong isn’t only that it makes eating vegetables taste so good for kids. It’s also incredibly easy to make! Your delicious lunch can be ready in less than 30 minutes with this foolproof recipe. Don’t forget to add your ketchup on the side!

Tortang Giniling, or ground meat omelette, is another one of those dishes that can so easily bring you back to your younger years. A bite of this omelette is sure to be chock full of memories of you eating this at home with your loved ones when you were younger. A delicious and easily accessible treat is what awaits you when you take a bite of this omelette. Plus, like any other torta, you’re free to add or subtract as many ingredients as you wish! There’s an omelette for everyone, after all.

How to Make Tortilla Espanola

Making omelettes is easy; we all know that much. But did you know that this tortilla espanola is so easy, you can make it in under 20 minutes? Here’s how:

To begin, peel and slice 5 medium potatoes, then dice a medium yellow onion. Combine these pieces together in a large bowl, then add a teaspoon of salt. Mix these ingredients thoroughly before setting it aside, and heating 2 cups of olive oil in a pot.

When your oil is hot enough, the next step is to fry the potatoes and onions on medium heat. This should take about 7 to 10 minutes. It’s important to remember to keep the heat on medium, as the goal isn’t to brown our potatoes –– only to cook them ever so slightly. Afterwards, remove the potatoes from the cooking pot and drain the excess oil, before letting it cool down for a few minutes.

Meanwhile, beat 6 raw eggs and add in half a teaspoon of salt, then whisk them together. Take your cooked potatoes and put them into the mixture, stirring it to distribute evenly. The next step in your tortilla espanola is to heat oil in an 8 to 10 inch non-stick pan; you can use the same oil from earlier. Once your oil is hot enough, add in your tortilla espanola mix, and cook for about 5 to 7 minutes. You’ll want to keep your tortilla on a low to medium heat, so as not to overcook your eggs! After all, omelettes are best fluffy; wouldn’t you agree? Be sure to check it manually as well, to prevent burning your tortilla espanola.

Now is the time to flip the omelette; do so by placing a wide plate on top of the pan and turn the pan over in a way that the plate catches the omelette. Place the pan back on the stove, then gently push the omelette back onto the pan, and cook for about the same time. Be sure to check on your tortilla espanola once in a while again!

When you’re done fully cooking your omelette, turn the heat off the stove. Transfer your tortilla espanola to a serving plate, alongside some rice or toast and ketchup on the side. Your dish is ready!

Enjoy your yummy breakfast (or breakfast for dinner)! Let us know what you think of this wonderful tortilla espanola. 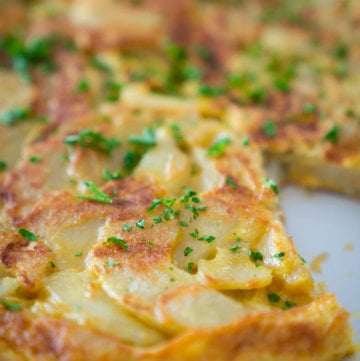