Bay leaves are a fragrant, flavorful herb that we often find in Filipino dishes. Another common name we have for bay leaf is laurel, as it comes from the bay laurel tree. Many may assume these leaves are only there for presentation or aesthetic purposes; you aren’t even meant to eat it when it appears during meals! However, although the taste itself isn’t overwhelming, many chefs argue that this herb brings a subtle but deep flavor to many dishes. In meals like adobo, afritada, and even menudo, bay leaf is an integral ingredient––even if it may not be the star of the show! 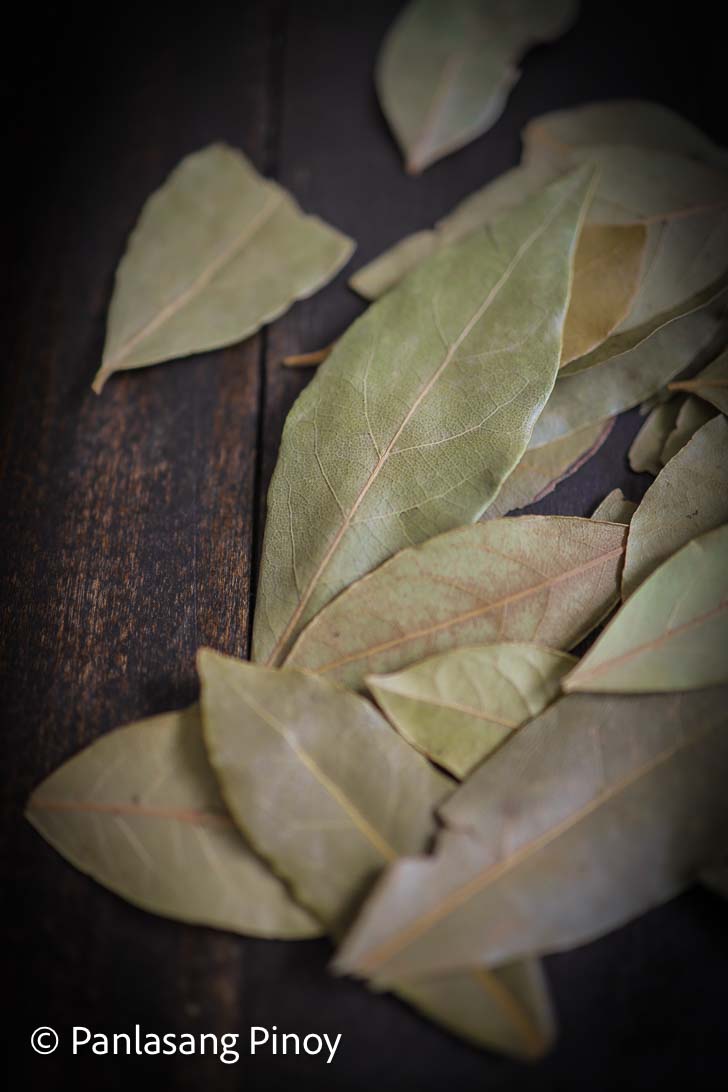 Many dishes that include these leaves in their recipes are those that are left to simmer and stew for a long time. You can usually put it about halfway through the recipe, as this is when it is most effective in impacting its flavor and fragrance. It is also effective in emphasizing the other flavors that your dish can bring.

Where do bay leaves come from?

As we mentioned prior, bay leaves actually stem from the bay laurel plant, which were popular in ancient lands, particularly Greece and Rome. In its Mediterranean origins, laurel wreaths back then were symbols of both victory and honor. It was originally known as daphne in Greek myth, named after a high priestess the god Apollo fell in love with. When she rejected his advances she fled to Crete, and in her stead Gaia put a laurel tree which Apollo fashioned wreaths out of to cope.

Since then, the daphne, or the laurel wreaths, became an emblem of high society. Other legends say that priestesses in Apollo’s temple would chew on the bay leaves before espousing predictions and prophecies about the future. Laurel wreaths were also prizes during their version of the Olympic Games at the time; if you had laurel on your head, that means you’d attained the gods’ favor!

Such traditions of holding the laurel wreath in such high esteem continued until the Roman Empire. Associated with immortality, prosperity, and good health, terms like poet laureate and baccalaureate came from how much we held the plant in high regard. In modern day Italy, students from Italian universities wear laurel wreaths during their graduation!

But it isn’t just in Europe that laurel wreaths have become so popular. Laurel was a common plant in Asia Minor, particularly in countries like Turkey and Syria. It also has roots in China, where it was commonly linked to a legend about the phases of the moon. Known as Moon gui, laurels were also associated with victory, much like its Roman history counterpart.

With its distinct smell and evergreen qualities, the laurel plant (and bay leaves, as a result) has really traveled the world, garnering importance worldwide!

Are there different kinds of bay leaves?

The two basic divisions are Turkish bay leaves and the California bay leaves. You can usually find these in supermarkets either fresh or dried. The former possesses a brighter, almost “shinier” green color, and its flavors are subtler. On the other hand, dried bay leaves are the ones we more commonly use in Filipino dishes. When you dry the leaves, like many other herbs, the flavor begins to grow more intense. Dried ones are the more affordable option, and they have a longer shelf life as well.

Turkish bay leaves are usually of the dried variety, while California bay leaves are sold fresh. The latter has an almost “minty” taste, which has the danger of overpowering a recipe’s other flavors. As such, the Turkish variety are the more common, more popular type––most of the Filipino dishes that call for it use this type.

What dishes can I cook with it?

It’s very important to note that you should not eat your bay leaves whole when you use them in meals! They may smell great, but eating them will only leave you with a bitter, sharp flavor.

From Spanish and French to Indian and Filipino, bay leaves have found a home in cuisines around the world. In the Philippines, here are some examples of dishes which Laurel leaves help shine:

You may not even notice its presence at first, but these fragrant leaves really work wonders in some of your favorite meals. What do you like to cook it in?

Are there any good substitutes?

Don’t worry if you go to the supermarket and bay leaves aren’t available. There are many herbs you can use as a substitute! Although it won’t be exactly the same, these herbs can still provide a subtle yet impactful effect on your dishes.

However, there’s nothing quite like bay leaves’ original flavors. If you’re planning to cook a dish that involves this unique ingredient, I suggest buying some bay leaves beforehand; after all, their long shelf life does come in handy!

Like any herb, bay leaves are full of their own medicinal and beneficial properties. Both laurel’s leaves and the oil you can extract from it are used in several medicines and ailments, especially before Western medicine began to spread across the world.

Some of the nutrients you can find in bay leaves are vitamins A, C, and B6. Iron, manganese, and calcium are some of the other nutrients you’ll be able to enjoy from its indirect consumption. Furthermore, adding it to a dish reduces your need to add more seasonings like salt or other ingredients that may have more fat! And although there isn’t quite enough scientific basis to fully prove the extent of bay leaves’ powers, you can take a glimpse at what it can do here.

In even the littlest or most subtle of ways, bay leaves really help improve your diet, and make your eating both a satisfying and healthy experience.

Dried bay leaves may be stored in any cool, dry spots where it is tightly sealed. Spice cabinets or pantries work best for this seasoning, most likely alongside your other herbs. As we mentioned earlier, bay leaves have a long shelf life of almost two years! But if you want to retain its flavor even further, you can opt to store it in your freezer.

It’s common to say that cooking is an art, but you can also view it as an equation. Every ingredient is integral to the recipe, or ‘formula,’ in order to produce a perfect product. You might not have even realized it at first, but bay leaves already do so much to make your cooking and consuming experience that much more enjoyable. With just a few of these leaves, this powerful herb can really assist the stars of any dish you put on your dining table.

Tell us about your bay leaf experiences today!