Long and purple with a trademark green stem, eggplant is one of the most common ingredients you can find in Philippine stews and soups. Although some don’t enjoy eggplant because of its texture, it’s a very versatile ingredient. Whether it’s in omelettes, salad, adobo or pinakbet, it’s hard to find something eggplant (or talong, as we call it) doesn’t work well in. With herbs and spices and other ingredients, eggplant becomes an effective assistant to the star of every meal––sometimes even the star itself! It’s easy to grow and work into dishes, which is no wonder why it’s so popular in the modern day Filipino kitchen. 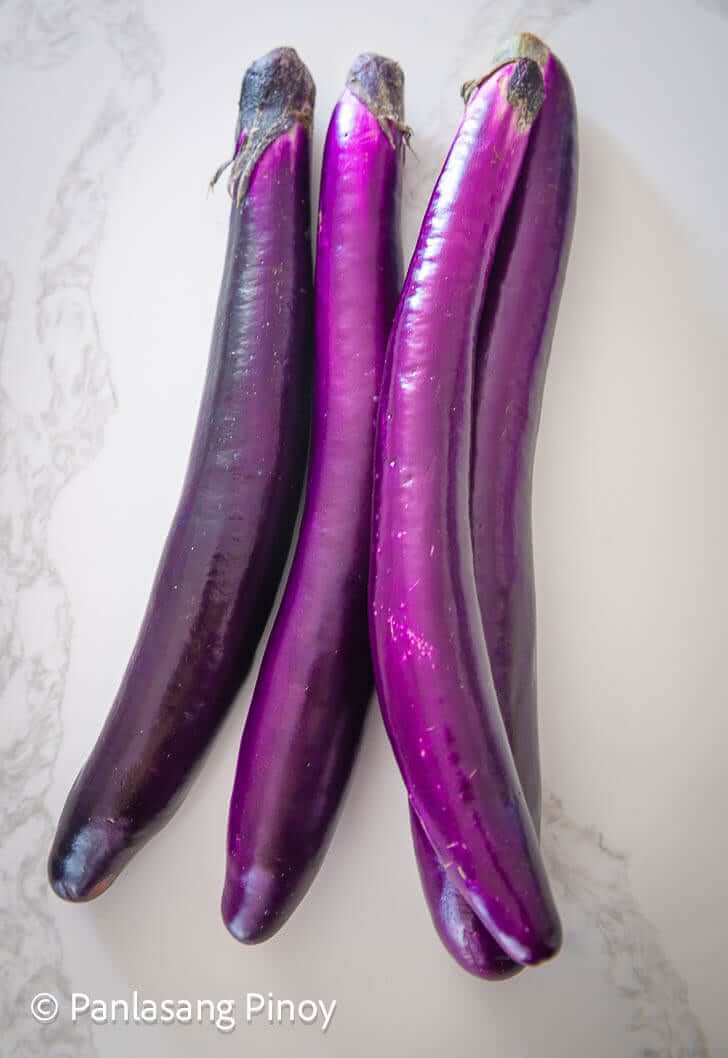 And it’s not just in the Philippines: people across the globe have enjoyed having eggplant in their cuisines for centuries. From our neighboring countries in Asia to those across oceans, eggplant has found a home almost everywhere. Its dynamic properties and rich, almost creamy taste make it a staple in dishes around the world.

Here’s a little known fun fact: did you know eggplants aren’t actually vegetables? While many classify them as such, eggplants, with the scientific name Solanum melongena, are actually berries! However, under the genus Solanum, their relatives include the tomato, the potato, and the chili pepper.

By now you might be asking: where exactly does eggplant come from? With such an expansive history, it would only make sense that this berry also has a multi-faceted history. Talong apparently has origins in India, though some contest and say it is an African native. Since prehistory, however, eggplant has been growing in South and East Asia. The earliest written record of eggplant is in a Chinese agricultural archive––dating back to as early as 544!

There are historic records, too, that prove that people also grew and harvested eggplant in the Mediterranean area by Arabs during the Middle ages. People brought it to Spain after. That was in the 8th century; 4 centuries later, historians unearthed an agricultural book from Arabic Spain, detailing how to grow aubergines!

Surprisingly, many people used to fear eggplants due to its close relative, nightshade. Nightshades encompass a large variety of plants, and many of them are poisonous or can become toxic in large quantities. In folklore, too, eggplants’ reputation wasn’t exactly favorable. In Italy, for example, eggplants were regarded as the root of insanity! For a berry that was grown almost worldwide, it certainly wasn’t a welcome one.

The many names of eggplant

With how many countries eggplant has found itself in, it comes as no surprise that eggplant goes by so many different names across the world. 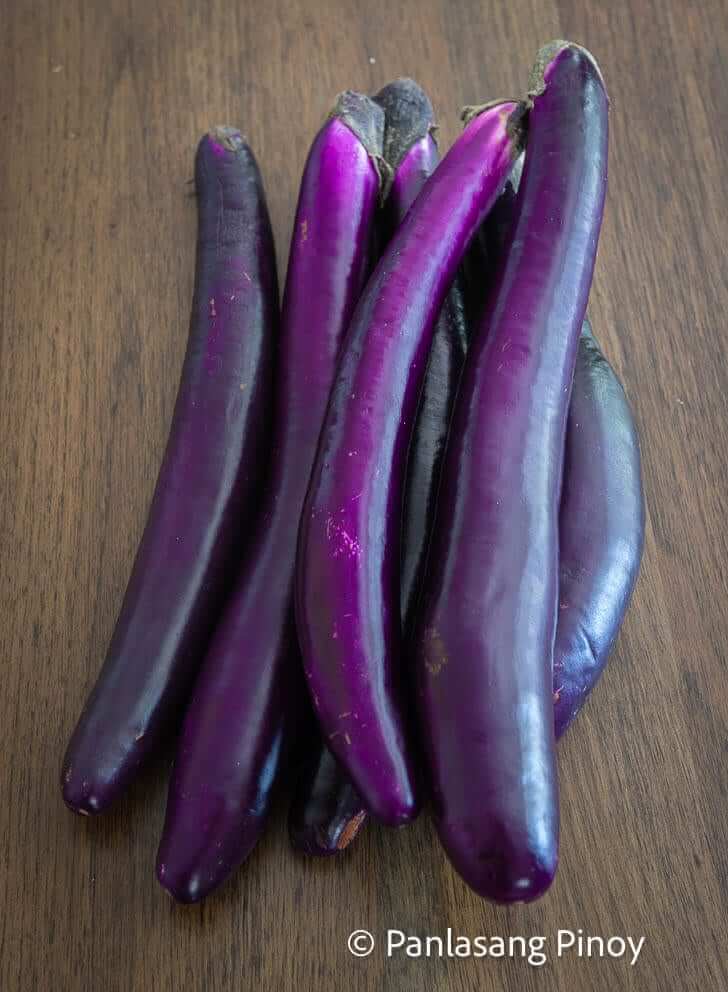 Eggplant, is of course, its most commonly known name. You might be wondering: why do we call them eggplants in the first place, when they don’t look like eggs at all? Believe it or not, they actually did look like eggs, once upon a time. In 17th century England, the product of the plants that grew these berries were small and white––a far cry from the long, purple description we’ve come to associate with it. Because of its chicken or goose egg-like appearance, the term “eggplant” came to be.

In the Philippines, talong is what we search for when browsing supermarkets and groceries for that long, purple berry. But in other countries like the UK, Ireland, and other portions of Western Europe, the people there refer to eggplant as aubergine. This is a direct translation to French, where people use eggplants all the time. The Italian and Spanish words for “eggplant” are quite close to each other –– melanzana and berenjana, respectively. Another common name for eggplant is brinjal, which is the more frequently used term in the South Asian region, as well as places like Singapore, Malaysia, and South Africa.

From this list of names alone, we can already tell our beloved talong is truly an international superstar!

Talong, aubergine, brinjal––whatever you call it, eggplant is undoubtedly loved not just for its versatility but its health benefits.

Eggplant is rich in fiber, protein, manganese, and nutrients like potassium and vitamins C and K. It is a great source of antioxidants, which make it effective in guarding your body against future ailments. Because of this antioxidant content, many believe that consuming eggplant helps in preventing several heart diseases from affecting your system.

Being so rich in fiber, eggplants are also great for keeping your blood sugar levels intact. They may even help with weight loss! You can read further about all the health benefits eggplant has to offer here.

This berry is packed with everything you could possibly want in an ingredient. And to make it even better, it’s so easy to add to your diet, too!

Dishes you can cook

As we mentioned prior, eggplants are nothing if not dynamic. There’s a reason they are so commonly used around the world, after all.

It’s important to note that eating raw eggplant isn’t exactly advisable. Raw eggplant has a bitter taste, which, coupled with its already spongy texture, isn’t great. Once you cook it, however, that bitterness fades away––immediately replaced by something creamier, milder, and altogether more pleasant.

90% of eggplant production comes from China, India, Egypt, Iran, and Turkey. This is because this berry thrives best in these countries’ warm climates, and is heartily used in several of these nations’ cuisines. Although not part of the list, France also loves their aubergines––incorporating it into several national dishes.

While we aren’t a part of that list, talong is still invaluable to Filipino cuisine. There are a million ways to enjoy eggplant: chopping it up and tossing it into stews, boiling it with other vegetables, frying it, or even stuffing it! Here are some recipes I can definitely vouch for.

Of course, one of the most popular recipes you can find talong in is the classic pinakbet. Who doesn’t love that heavenly combination of crrrrunchy lechon kawali, paired with the freshest vegetables? Bagoong alamang also gives pinakbet that extra zing of flavor we all love. Talong may not be the star of the show here, but it definitely plays an important part.

Tortang talong is one of the most popular eggplant recipes in the country. Simple and quick to make, tortang talong is essentially eggplant omelette. Growing up in a Filipino household, you’ve probably had this at least once. I personally enjoy tortang talong with rice and some ketchup to dip it in on the side. One of my favorite parts of this dish is that you usually serve it with the stem still attached. Not only that, but tortang talong is such a basic dish that anyone can make!

But if you want something even simpler (and healthier, too), I would recommend this recipe instead. This is for those who want something a little lighter after having hearty meat dishes. It’s a simple, humble dish, but the taste of steamed eggplant and okra always hits the spot when paired with the salty, umami bagoong. In only 15 or so minutes, you’ll be able to serve this dish, and enjoy it, too! For an added kick, I recommend adding chili flakes to spice it up.

This is basically your tortang talong with a twist! I love relleno of any kind, be it bangus, pusit, or manok. But this rellenong talong, in my opinion, is the perfect combination of healthy and hearty. With yummy, flavorful pork giniling inside your perfectly cooked eggplant omelette, this is great for even kids who are picky eaters––and adults, too!

Another recipe kids are bound to love. It has all the delightfully cheesy tastiness that kids love in spaghetti, but with the health benefits that this vegetable provides. This is basically a lasagna without meat or pasta of any kind (although you could put it on a bed of noodles afterwards). This Italian dish has become just as much of a comfort food to Filipino homes.

These are just some of the many ways you can enjoy eggplants at home. What’s your favorite talong recipe? Let us know in the comments below.

How to keep your fresh

Bought one too many eggplants from the store? It happens to the best of us. Not to worry, though; eggplants can last in the vegetable crisper or section of your fridge for a long time. You just need to know how to store it well. 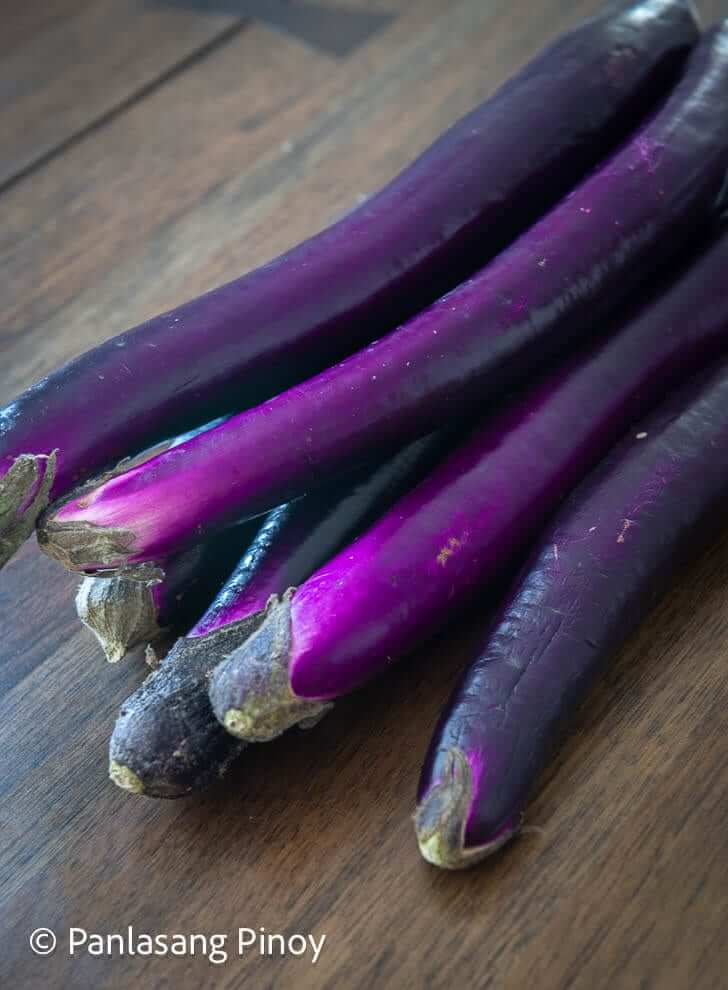 Make sure to always clean your vegetables before storing them. I like to wash it in a mix of water and vinegar, in order to rid it of the bacteria that forms around the skin. Once I’ve dried them all up, I wrap them up in paper towels, individually. Then, I place them inside a zip-lock or plastic container, almost but not quite sealing it the whole way through. From there I get to store it in the vegetable crisper––and I’m done!

Try to use these veggies as soon as you buy them, though––freshest is always best!

With a long history and a diverse impact on so many cultures, eggplant is really one of the best vegetables (oops; not-vegetable) out there! Don’t be afraid; try it today!