What is the perfect meal? Typically, it’s one that manages to satisfy all three tiers of the food pyramid. First, you have your carbs — pasta, bread, or, in most Filipino cases, rice will do the trick for that. Then, you have your proteins. This can come in an array of ingredients, whether it’s meat, seafood, or even tofu. And of course, your hearty meal wouldn’t be complete without some greens and veggies to keep your body chock full of nutrients. Altogether, you have a meal that is satisfying from beginning to end. And that is exactly what this ginataang hipon, sitaw, at kalabasa is!

A warm, homemade meal can rarely get any better than this ginataang hipon, sitaw, at kalabasa. On their own, each component is a star of its own, and can make any eating experience much brighter. But put them together and you have a powerhouse of a meal that your whole family will surely scarf down. Brimming with excellent flavors and an aroma to die for, this ginataang hipon dish is beloved across the country. Why wouldn’t it be, when it’s just so delicious?

Ginataang hipon, sitaw, at kalabasa is only one of many Filipino dishes we refer to as ginataan.

From fish, to jackfruit, to even pork, a lot of dishes have been made even better by the presence of coconut milk, or gata. This warm, rich liquid has become a go to for people looking to spice things up in the kitchen. Coconut milk works great not only in desserts, but in savory dishes too. In fact, in regions like Bicol, you’ve gata try all their gata dishes (pun intended!).

Coconut milk is nutty, sweet, but not overpowering in its flavor. This makes it perfect for dishes like ginataang hipon, where all the other ingredients have a good flavor of their own. Here are some other ingredients where gata truly shines, and highlights all other flavors of the dishes they’re in!

The Bicolano term for delicious or masarap is masiram — something you definitely won’t be able to stop saying once you get a load of this yummy meal! Ginataang hipon aside, I’d say Bicol Express is another quintessential example of the perfect dish. Here, coconut milk truly shines when you pair it with thick and juicy pork belly. Add some shrimp paste and chili peppers, and you have for yourself one spellbinding dish. The sweetness of gata works perfectly well with the spicy chili peppers, and bagoong adds even more umami. Don’t believe us? Try it for yourself, and you’ll be on the Bicol Express train in no time!

Move over, Avengers; we have a new crossover event of the century! Don’t you just love when two of your dishes fuse together to create something nothing short of otherworldly? That’s what you get in this delicious, mouthwatering Pork Kaldereta sa Gata! What this dish is able to do is combine what you love most about both dishes and put them all in one stellar and delightful meal. Pork kaldereta sa Gata has a saucier, more prominent tomato base than dishes like ginataang hipon. But the coconut milk that flavors it is truly an ingredient impossible to miss.

We know we’ve spoken a lot about filling meals like ginataang hipon and Bicol Express. But who said all ginataan dishes have to be savory? This Ginataang Bilo-bilo with Langka begs to differ! Filipino cuisine is as innovative as they come, and we see ingredients like coconut milk in all sorts of dishes, regardless of their taste palate. From appetizers straight on down to dessert, there’s a gata dish for everyone!

Think of this rich and creamy dessert as a simple Ginataang Halo-halo — another Filipino classic. Ginataang bilo-bilo is a dessert soup; I bet you don’t have plenty of those, do you? Much like other savory stews, a wide assortment of ingredients comprises this sweet dessert. Tapioca balls, glutinous rice balls or bilu-bilo, and of course, the hearty jackfruit, comprise this sweet treat. The best part about this dish is that you can have it any time of day you like! If you’re enjoying it as a snack, best to serve it warm. But it’s also equally delicious as a cold breakfast with loved ones.

And coconut milk is healthy, too!

A tasty alternative to cow’s milk, coconut milk is also chock full of nutrients. A good source of calories and saturated fat, studies have proven that gata can also aid in weight loss. Further, you might find that enough coconut milk can help in maintaining healthy cholesterol and heart levels. No wonder people adore it so much!

What is your favorite dish to use gata in? Let us know in the comments below!

This dish is a combination of two popular ginataan dishes, namely Ginataang Hipon and Ginataang Sitaw at Kalabasa. The former, as you’ll notice, doesn’t make use of vegetables often; only chili peppers and ginger add extra layers of taste to this hearty meal. This isn’t necessarily a bad thing; many people have enjoyed the sumptuous shrimp in ginataang hipon, time and time again. Serving this tasty dish with portions of rice will have you full in no time! It’s no surprise that people love this ginataang hipon rendition, as it’s easy to make as well and doesn’t require that many additional ingredients.

But for those who enjoy healthier alternatives but long for that creamy taste of gata, ginataang sitaw at kalabasa is more often than not a go to. Squash is quite the ingredient; this bright yellow ingredient has a mild but sweet taste you can use in a repertoire of dishes. And sitaw is equally as versatile and dynamic! Not only that, but both of these ingredients have their fair share of nutrients important in any balanced diet.

This dish makes use of almost the same ingredients as ginataang hipon, with common spices like ginger, garlic, and onion. The only difference thus lies in the meat that you use. In ginataang sitaw at kalabasa, pork makes an appearance, adding protein to this hearty dish. While this addition may be seen as optional, pork gives this ginataang delight an extra layer of texture and flavor. Juicy, tender, and delicious, your pork can easily soak up the rich flavors of your coconut milk and other spices.

In this Ginataang Hipon, Sitaw, at Kalabasa, the ingredients are essentially the same. Here is a list of what this dish requires, as well as possible substitutes as you see fit:

Some people opt to add ginger to ginataang hipon as well. Ginger masks the fishy smell that so often follows seafood around, but it also adds a distinct flavor of its own. The smell and taste of ginger is unmistakable, and any dish you add it to becomes infinitely better. And don’t forget its large array of health benefits, too!

Now that you know what ingredients you need, it’s time to get cooking! Let’s make this ginataang hipon, sitaw, at kalabasa together!

How to cook ginataang hipon, sitaw, at kalabasa

The first step in this dish, as is common in most dishes, is to heat oil in a cooking pot. Three tablespoons of cooking oil are enough, before adding in your garlic and onion pieces. Sauté these two in your pot, softening your onions. Then, add in your shrimp, and cook for 1 to 2 minutes. Remove from the pot and set them aside, as we don’t want the shrimp of your ginataang hipon to overcook.

Next, toss in your 2 tablespoons of bagoong alamang, and pour in 2 cups of coconut milk or gata. Bring this fragrant mixture to a boil while stirring, then add your kalabasa cubes. Your squash should cook for 8 to 12 minutes, or simply wait until they’re tender to your liking. Once they’re tender enough for you, put the shrimp you cooked back in the pot, and stir once again. Incorporate all your ingredients well, cooking for about a minute. The rest of your ginataang hipon’s veggies go in now, too; add in your sitaw and malunggay leaves! For 2 to 3 minutes, let your ginataang hipon, sitaw, at kalabasa cook. Add salt and pepper to taste, then turn your heat off the stove.

Transfer your ginataang hipon, sitaw, at kalabasa to a serving plate. This dish is best served piping hot — so don’t be afraid to dig in right away! With how amazing it smells, I doubt you and your family would be able to wait a little longer.

Share and enjoy this ginataang hipon, sitaw, at kalabasa! Did you love making this tasty, hearty treat? Let us know what you think! 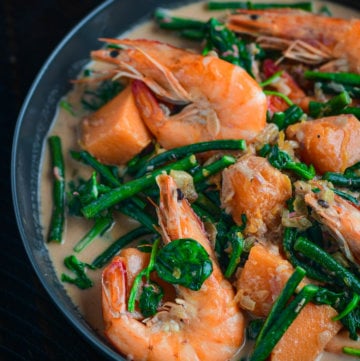